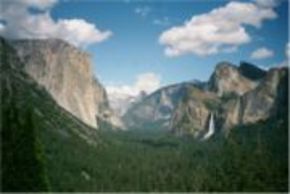 Travel Guides > North America > United States > California Travel Guide
From Mickey, to Golden Gate Bridge, to wine country, and to the Governator. This is California.

California also known as the land of golden opportunities or the land of milk and honey or the Grape State or the El Dorado State shows that the 3rd largest state is only suited to be known by a varied list of names representing it's massive size and diversity.

It makes you wonder where to start? Let's just dive into it!

Los Angeles is home to the movie stars and it’s the same home to some people from hundreds of different countries, each with the ability to speak the language of their native tongue. Here you could find your days strolling Venice Beach, to basking in the glamour of Beverly Hills, star spotting in Hollywood, family fun at Disneyland, Universal Studios, Knott’s Berry Farm or a night out on Sunset Boulevard filled with fancy cars, trendy fashions and high energy.

San Francisco one of the most beloved travel destinations in the world is still alive and bustling with the cable car rides over Nob Hill, picturesque backdrop of the Golden Gate Bridge, the Castro's colorful Victorians, restaurants and pubs and the historic Palace of Fine Arts home to Exploratorium, referred to as “the best science museum in the world”.

San Diego, it's natural beauty, beautiful weather and plentiful outdoor activities, who could ask for more from a city that has managed to keep a small town ambience. Sea World and the world famous San Diego Zoo are two names that draw more 14 million visitors annually.

If you are looking for the smaller not as crowded California getaway let us tell you about Monterey. It's located right along the coast of California and is a beautiful, historic seaside community. Few California cities contributed as much to the historical story of early California as Monterey. The story of Monterey extends beyond its secular and sacred origins. The Victorian homes of Pacific Grove grew out of a Methodist seaside camping retreat. In his book CANNERY ROW, John Steinbeck immortalized a chapter of recent Monterey history depicting the sardine fishery and its workers.

The one great constant, the thing that makes this area special still, is the long stretch of ocean that borders it. A few years ago, recognizing the area's ecological worth, the federal government set aside a 5,200-square-mile area as the Monterey Bay National Marine Sanctuary. It is the largest protected oceanic zone in the United States, and second in the world only to Australia's Barrier Reef. The area is home to countless blue whales, seals, fish, and seabirds, many on the endangered-species list.

This place is it for the whole family. The jewel of the area is the Monterey Bay Aquarium. Situated in Monterey's Cannery Row, the world-acclaimed aquarium representing nearly 600 species. There are even rarities, such as Pacific hagfish, eelpouts, and squat lobsters, that only deep-sea divers have witnessed until now. There is a play land for the younger crowd who can play and learn at the same time about things like our earth, resources, how to conserve and keep them clean. There is also Fisherman's Wharf for those who like to watch the surf, listen and gaze at giant sea lions.

There's really no starting point or ending point, it's whatever you want it to be for you.

Burbank, California, was officially established in 1887. In the course of Burbank history, Burbank has grown from a ‘tiny village’ to a ‘major Los Angeles suburb and subsequently to being the ‘Media Capital of the World’. Before moving on to that part of Burbank history, however, we will pause to look back. ...  Read more »

The city of Palm Springs, California, USA, has an extended history. Anthropological calculations indicate that Palm Springs history can be dated back to about ten thousand years when the area was inhabited by indigenous tribes....  Read more »

If you are looking for a fantastic desert playground in US, then Palm Springs in California is undoubtedly the best choice that you can make. Palm Springs is about 2 hours drive from San Diego. This small town has tons of entertainment hidden to make your holiday a lifetime memory....  Read more »

This Garden Grove travel guide will give you an insight into the life and atmosphere of the Californian city that belongs to the Orange County. It was founded as a city in 1956 and it has been known ever since for its agricultural function. Garden Grove has 175.000 inhabitants and the population is divided into 47 percent whites, 31 percent Asians and 2 percent African Americans....  Read more »