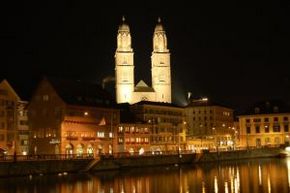 Switzerland, the land-locked western European country, appears no less than a natural paradise with its snow-peaked mountains, crystal-clear lakes and rivers and verdant valleys. But then, the scenic beauty of Switzerland is not the only reason that sees people flocking to this tourist haven; instead, it is the lures of winter sports, cheese, chocolates, cosmetics and watches that entice vacationing crowds from the world-over. Switzerland also has many enchanting towns and cities, rich in their architectural wealth ranging from simple timber-houses to majestic buildings, bridges, cathedrals, etc. for you to explore.

Switzerland is among the richest economies in the world; in fact, the Swiss city duo of Zürich and Geneva are ranked second and third respectively in the high-quality of life they offer. Of course, it is not just these two cities, rather the advanced facilities and infrastructure of the nation assures a good standard of living for all the Swiss-citizens.

Switzerland is not a part of the European Union; however, the Swiss-nation enjoys easy trade-relations with other European countries owing to the European Free Trade Agreement. Switzerland’s strength, of course, is the service sector and the country is well-known for its banks, financial institutions and insurance companies. Tourism is also a major economic-contributor.

Switzerland is a culturally diverse country. Swiss-people belonging to different regions follow different cultures and traditions and speak different languages. This has largely to do with the fact that the people practice what their forefathers brought with them from their original homeland in the neighboring regions.

Switzerland has always championed humanitarian causes as a nation; this is not only reflected in the impartial stand it has adopted for the last two centuries (not showing any special allegiance to any superpower), but also in the fact that the Red Cross Movement began here and that many international organizations like United Nations have their offices in Switzerland.

Swiss folk-art, manifested through various media like dance, music, poetry, etc. will give you the very essence of the nation’s mixed culture.

Lugano, the largest city of the southernmost Swiss canton of Ticino, has captivated tourists for long. Each aspect – be it its great natural beauty, its mild Mediterranean climate or its rich culture and heritage – has been a huge pull. No wonder Tourism has been the mainstay of Lugano’s economy for quite some time now....  Read more »

This Berne travel guide will give you all the essential information you need when visiting the capital of Switzerland. Although it is only the fourth largest city in the country (after Basel, Zurich and Geneva), Berne functions as Switzerland’s capital and is the main administrative center of the country. Its population barely exceeds 130....  Read more »

The city of Lugano is known as one of the important financial centers in Switzerland. This modern city has a lot to offer not just in terms of economics but also in terms of tourism. Tourists will find many interesting places and landmarks to visit while staying in Lugano.  Read more »

Berne is known as one of the most crowded cities in Switzerland. However, before the increase of population in the city, Berne started as a small residence for people in the Neolithic Era. From there, the city’s population began to rise and Berne History started.  Read more »

Lugano in Switzerland can trace its beginnings back to ancient history. Considered as a rural place Lugano History started in a small lake and continued up until the town gained its importance in Europe. Look into the most important events in this city of Switzerland and link it to Zurich History.  Read more »