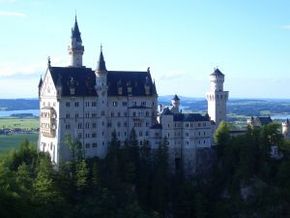 Germany travel truly means unforgettable experiences! Germany, on the one hand, is a natural paradise of sandy coastal beaches, forests, river valleys, hills and mountains; and on the other, it fascinates one with its wealth of architectural treasures ranging from Romanesque, Gothic, Baroque structures to modern high-rises. Germany, again, has vibrant urban centers as well as quaint villages.

The land of geniuses (like Einstein, Beethoven, Goethe, Marx and other famous-masters) and of revolutionary innovations (like automobile and MP3 technology), Germany also assures you frivolous entertainment in the form of its varied delectable cuisine, shopping and nightlife. With its sporting activities and its spas/wellness-centers, Germany travel indeed means a relaxing/rejuvenating break.

• Religion: Christianity is the religion of the majority (64%). Other religions followed are Islam (4%), Buddhism and Judaism (0.25% each) and Hinduism (just 0.1%). About 29% people have no religious identity.

Berlin: Berlin is the capital and largest city of Germany. Known as the ‘greenest’ metropolis of Germany, Berlin has many parks and forests. The city also has a number of lakes covering a major part of its land-area. The ‘Berlin Film Festival’, ‘Berlin Philharmonic Orchestra’ and Berlin’s many museums have given the city recognition as the European ‘City of Culture’.

Cologne: Cologne is one of the oldest cities of Germany founded in 38 BC. A major cultural center of Germany, Cologne is as much famous for its Kolsch-beer as for its 2000 year-old Kölner Dom (Cologne Cathedral) and its many museums and art-galleries.

Hamburg: Hamburg, the second-largest city of Germany, is a city-state. Hamburg is famous for its many bridges (more than 2300 in number) and its parks. With its famous port, towering churches and hosts of museums, Hamburg has become a top-tourist draw. Hamburg promises you eclectic nightlife with its many music venues and theaters apart from its bars and clubs.

Munich: Munich, the former Nazi-stronghold, has been re-built after the war. Munich is famous for the Oktoberfest, Bayern Munich, the city’s historical sites and other tourist attractions (which include parks and the Olympic Stadium), its museums, opera/theater halls and even its beer-halls.

Other Popular Destinations: There is much to see in Germany apart from these four major cities. Dresden is a cultural and economic center of Germany and is rendered famous by the Baroque structures. Rothenburg ob der Tauber is a famous medieval town. Places like Berchtesgaden and Rügen Island are famous for their scenic landscapes. Cities like Weimar have become famous for their eminent residents like Bach, Goethe, Schiller and other great people.

Germany is ranked first among the many European national economies. Germany has a strong service sector that contributes a major share, about 70% of the total GDP; the contributions of the industrial sector and agriculture are about 29% and 10% respectively.

A member of the EU, Germany is among the topmost exporters of the world.

German-industries have been trend-setters in their innovative technological findings and today Germany is the world’s principal producer of solar power technology and wind-turbines. About 37 of Fortune Global 500 companies have their headquarters in different German cities. Besides, Germany is also the producer of global-brands like Adidas, BMW, Mercedes Benz, Nivea, Porsche, etc.

Germany has a sound infrastructure in place to support both tourism and trade.

Germany is a culturally rich country and the influence of its heritage is manifested in every sphere – be it architecture, fine-arts, performing arts, literature or music. Germany also has innumerable museums and organizes a whole host of cultural/religious events. Germany’s mouth-watering cuisine – meat-preparations, cakes and desserts – is famous the world-over and today Germany’s wine/beer festivals have become integral part of the German-culture.

Heidelberg with its varied architecture and colorful cultural life blends harmoniously the traditional with the modern offering visitors a fascinating and unique place to visit and experience....  Read more »

Located in the Southwestern part of Germany on the river Neckar, Heidelberg is one of the most attractive old cities with a varied cultural scene and international reputation....  Read more »

For many years Germany has been one of the most popular attractions and the beer-brewing capital of Europe. Dortmund Nightlife didn’t disappoint its inhabitants, welcoming tourists with the best bars and night clubs....  Read more »

Wiesbaden is the capital of Hesse region in Germany, but this is not what makes the city special. As its name says (in German, baden means bath), Wiesbaden is a spa city. Even centuries ago, the city was famed in Europe for its therapeutic baths. In Ancient times, the Romans discovered the thermal springs that proved to be veritable goldmines later on in history....  Read more »

Wuppertal is no Cologne (Köln) or Dusseldorf, but still there is enough to see in this Wupper-valley city to keep tourists engaged and engrossed for a few days....  Read more »