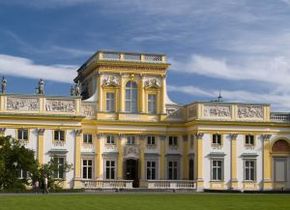 Poland, officially known as The Republic of Poland is a country in Central Europe, bordered by Czech Republic and Slovakia to the South, Ukraine, Lithuania and Belarus to the East, Germany to the West and The Baltic Sea and Kaliningrad Oblast, a Russian exclave, to the North. The country’s name, used since the beginning of the 11th century comes from a tribe and it means „inhabitants of the plain”.

Although Poland looks like a continuous plain, its relief is very complex. Rysy, the highest peak, reaches up to 2499 meters. Poland is divided in parallel regions from East to West. The Northern area, which covers two thirds of the territory is that of plains and low hills, divided into the Polish central plain, the Baltic heights and the seashore plain. Large and swampy valleys are scattered along the central plain. The seacoast is flat with the exception of The Bay of Pomerania in the West and The Gulf of Gdansk in the East. One third of the territory is occupied by highland relief: hills, plateaus and mountains. The Carpathian Mountains are located at the south-eastern border and they include the low plateaus.

Due to its geogrphical location, Poland has a transitional climate, between maritime and continental. As a consequence winters are either mild or cold and summers are either hot or rainy. July is the hottest month, but temperature in summer is generally between 21-32 ˚C. Autumn begins in September. Thereafter days become colder and temperature may drop from a few degees below 0 to sometimes -20 ˚C.

The official name of the capital is actually Miasto Stoleczna Warszawa. It is located in the region called Mazowse, in the core of the country. The towns in this area are studded with monuments, museums, hotels and inns. The capital is famous due to its indestructibility. Although it was destroyed many times, it managed to become one of the most beautiful cities in Europe.


The Independence Museum is one of the most famous buildings in Poland, offering information regarding the country’s tragic past. The square is guarded by the Mermaid’s statue, which is the symbol of Warsaw.

Malopolska is by far the most important region in Poland, the main destination being Cracow. According to the legend, the name comes from the mythical Krak who is said to have built the city over a cave where lived a dragon. This is the explanation for the dragon shaped souvenirs as well as for the statue in front of the Wawel Castle. Cracow has the largest square in Europe, Rynek Glowny. The city is famous for its tidiness, carriages and architectural monuments. The square shelters Saint Mary’s Church which is made out of red bricks and its towers are uneven. The legend says they were built by two brothers and the elder being jealous of the fact that his sibling was in advance killed him and committed suicide afterwards.

The most beautiful architectonical pile, The Wawel Castle and the fortified Wawelska Cathedral are located on the Wawel hillside, above the Vistula water flow. The Wawel Castel, initially designed in a Gothic style, was transformed by Sigismund I into a grandiose residence of Renacentist style. Nowadays it shelters the National Collection of Art, consisting of paintings, pottery, an impressive collection of weapons, as well as The Crown’s Treasure.

It is a surprising town due to the diversity of the architectural styles of churches, houses and museums. It is also an important economic and cultural center and it has become famous for the craftsmen’s fairs which attract many visitors.

It is a town which bears a stirring history, being one of the most captivating cities of Europe, often considered a miniature version of Prague. It is studded with Gothic buildings which captivate the eye.

The zloty, which litterally means „golden” is the currency of Poland. The modern zloty is subdivided into 100 groszy. The currency underwent redenomination and since 1995, 10000 old zlotych became one new zloty. If you want to make a phonecall from a foreign country, first you have to dial 0048, which is the prefix. The best time to visit Poland is during summer, as the weather is milder in comparison to the cold winters. It is also important to carry a conversation guide as there are few people who speak foreign languages.

Katowice is the capital of the Silesian Voivodship and one of the biggest industrial centers in Poland. Because Katowice is a relatively new city and that it suffered important loses during the Nazi occupation, there is not so much to see in terms of historical buildings....  Read more »

Although Olsztyn, the capital of the Warmian-Mazurian Voivodeship, is not a very big city, its streets become very animated at night. Olsztyn nightlife revolves around two centers: the Old Town (Stare Miasto) and the Warmian-Mazurian University campus (Kortowo). Located in the woods surrounding Kortowo Lake, the campus is one of the largest in Poland....  Read more »

Capital of the Greater Poland Voivodeship, Poznan is one of the most beautiful cities in Poland. With a thriving economy, a strategic location and a nicely preserved historic centre, Poznan is a real magnet for tourists.  Read more »

Katowice, Poland is a typical modern city, where contemporary arts and the modern lifestyle find a common ground. It’s hard to define Katowice nightlife in a few sentences: the city is growing so fast that every week a new restaurant or club pops-up. But if you want to play safe, here are some suggestions:  Read more »

Katowice is a relatively new city judging after Polish standards. Although archeologists have found traces of human settlements dating back to the 13th century, the official birth date of Katowice is 1598. That year, Reverend Kazimierski made a visit to a small parish called ‘Bogucice’. Back then, Katowice (that wasn’t even called this way) was mainly known for its smithies....  Read more »