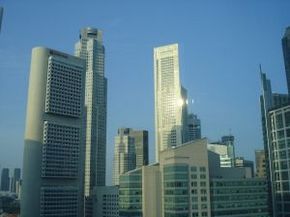 Known as one of the busiest ports in the world, and one of the greatest centers of industry and commerce, Singapore has exceeded the expectations from a relatively compact sized country to that of a manufacturing superpower. Strategic location, thriving commercial activities, rich culture and the scenic beauty that Singapore has to provide makes it a popular destination for both, pleasure and business tourists alike.

· Chinatown: Declared as the national heritage site of Singapore, Chinatown is also one of the most important centers of historical and cultural significance in Singapore. The rich cultural heritage of the city can be experienced in its colorful streets and the harmonious blend of Victorian and Baroque styled architecture seen throughout in the buildings of the city. Popular attractions for tourists include the 19th century temples, Chinatown Food Street, the Chinatown Heritage Centre and the Chinatown Night Market, to name a few.

· Singapore city: The capital city of Singapore is undoubtedly the most visited destination in the country. With ample avenues of entertainment at Suntec City, Night Safari, Geylang Serai, Zoological Gardens and various art museums, this glittering city will capture your heart for ever.

· Sentosa Island: This island city is a must see for any tourist planning a vacation to Singapore. Major attractions in this beautiful island include, the Underwater World- displaying a few of the rarest and most beautiful marine life in the world, the Siloso Fort- the only preserved fort in Singapore, the Carlsberg Tower- known for its scenic views of Singapore and the Merilon Statue. Rich culture, impressive history, breath taking scenery and exotic marine life that Sentosa has to offer is sure to charm any tourist to spend a few more days here.

· Little India: As the name suggests, it’s a city that harbors a large part of the Indian settlement in Singapore, and almost anything you find in this place would remind you of India. From garlands, to roadside music, to Ayurvedic massages to 'mehendi'-(art work on the palms and feet of women with henna) any tourist will find this town impressive. A few of the popular tourist attractions one would find here are the Tekka Centre, the Tekka Mall and the Little India Arcade. Here you can find ethnic merchandise of India such as saris, jewelry and much more and you will also pamper your taste buds with great Indian food.

Singapore’s economy is a perfect example of a highly developed mixed capitalist economy. The strategic position of the ports has added to the prosperity of the region. Exports contribute a lot to this emergent economy. Major exports include semiconductors, consumer electronics and chemicals. Another important industry that contributes to the Singapore’s economy is the tourism industry. With strong aviation sector, good means of rail and road transport, the country has very high standards of health and sanitation facilities. The government of Singapore holds a sound footage over education and there are good facilities of basic and higher education in the country.

The culture of the country may be called an amalgam of Indian, Malay and Chinese culture. Buddhism, Hinduism, Christianity being the major religions, there are followers of Islam and Taoism as well. This cosmopolitan center is a thriving arena for art, theater and music. Singaporean cuisine is greatly influenced by Indian, Chinese and Malay cuisines. Satays are one of the examples of its own distinct cuisine.

Boon Lay is actually a city produced by the labors and hardship of one of the town’s most significant clan.  Patterned from Chew Boon Lay’s popularity, this city became the end result of the efforts of this businessman.  This family did not merely saw things through for Boon Lay but for the entire Singapore as well....  Read more »

Since Boon Lay is more of a village or a residential estate, according to some, there are not a lot of sights that you can go to see.  In spite of this, Boon Lay is still worth a visit.  In fact, it is a home to remarkable buildings and parks.  Read more »

More than a town, Boon Lay is regarded as a housing estate.  This city can be found in the Western district of Singapore.  The name of the city was taken after Chew Boon Lay, who was a well-known businessman who owned a rubber estate in the town.Travel Boon Lay has several public transportations....  Read more »

Singapore has made a great impact on the world with its tremendous growth. It has become one of the most popular and most sought after cities in the world. At first sight, you will be astonished by the profound looks of the cosmopolitan city, but when you take a closer look, you will find that the people of Singapore have their roots in the ancient traditions.  ...  Read more »

The initial accounts of the subsistence of Singapore are from the Chinese who described the island as Pu Lo Chung as early as in the third century. It is believed that Prince Sang Nila Utama came to the island in thirteenth century. The name of the city is also believed to come from the name of wild beast found in the region called as Singa or Lion....  Read more »