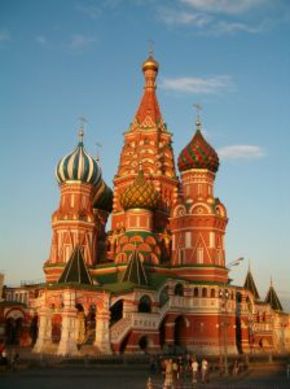 Known as the largest country in the world, Russia offers a great deal of facilities for all those interested in spending their holidays there. It has a population of almost 141.9 million inhabitants descended from more than 100 ethnic groups, but it is not an impediment at all to make yourself understood there. Russia might be one of the most adventurous and unpredictable destinations on the continent for everyone who is keen on exploring a mystical and fascinating landscape.

Russia incorporates a wide range of environments and landforms. Its relief consists of vast plains which are predominantly steppe in the south and tundra, heavily forested, in the north. Because of its large forest reserves, Russia is known as ’the lungs of Europe’. The most important mountain ranges consist of the Caucasus in the south, where you can find Europe’s highest peak, Mount Elbrus (5,642 m), the Altai Mountains in Central Asia and the Ural Mountains, extremely rich in mineral resources, which divide Europe from Asia.

You shall not forget about the well-known Siberia, an unexplored and miraculous plateau which covers almost 10 % of Earth’s land surface. Siberia is the least populated area, with a population density of about three people per square kilometer. Most Siberians live in cities, but there are many people living in simple, spacious log houses in rural areas. The best way to tour Siberia is through the Trans-Siberian Railway. It takes several days to complete the journey from Moscow to Vladivostok by Trans-Siberian Express, but the train has 1st class 2-berth compartments, 2nd class 4-berth compartments and a restaurant car.

Russia- When to Visit

The best time to visit Russia is during summer. The enormous size of the country and the remoteness of several areas from the sea determine a dominance of the humid continental and subarctic climate. Throughout its territory there are only two distinct seasons: summer and winter. Russia is known as the coldest country as the low average temperature of the year is – 5.5 degrees Celsius. January is the coldest month of the year and July is the warmest. Summers are quite hot and humid. The continental interiors have a dry climate. Winters are extremely cold and temperatures can easily drop under – 20degrees Celsius.

Russia can be reached by land, by air and by sea. The fastest way to get to Russia is by plane so you can choose Aeroflot Russian Airlines which offers cheap fares; flight tickets can be easily purchased through Way to Russia online interface.

Russia- Getting a Visa

Moscow is the capital and the largest city of Russia, being also the largest metropolitan area in Europe. If you are planning to visit Moscow as a tourist, hotel reservation at discounted rates is offered by a variety of tour agencies all over the world. Good accommodation is provided in hotels of any level: from tourist class to five-star luxury hotels. Booking may also be done online. Restaurants are easy to find and they offer various cuisines, from traditional Russian to Caucasian or even Exotic cuisine.

Moscow is home of Kremlin, the President’s residence. The Parliament which houses the State Duma and the Federation Council as well as the Government of Russia are also in Moscow.

The world best-known site in Moscow is the Red Square surrounded by Saint Basil’s Cathedral, one of the most impressive cathedrals with elegant colored onion domes, Lenin’s Mausoleum, which contains the embalmed body of Lenin, the founder of the Soviet Union, and the palaces of Kremlin. It is considered to be the heart of Moscow, in fact, the heart of the entire Russia.

Saint Petersburg is the second largest city in Russia. It is an important European culture centre and a main port on the Baltic Sea. Once touring Saint Petersburg, the ensemble of Peter and Paul’s Fortress with Peter and Paul’s Cathedral on Zayachy Island along the right bank of the Neva River, should be any visitor’s main target while sightseeing the city. A cannon fires a blank shot from the fortress at noon every day.

Saint Petersburg offers good accommodation for its tourists and specific traditional Russian food can be ordered in any of its luxury restaurants.

Saint Petersburg is a major transport hub. The city is the final destination of an impressive network of intercity and suburban railways.

Russia is such a vast country that it would take more than a lifetime to explore all its abundant natural beauty and to discover its rich cultural heritage.

Ufa is one of the most important Russian cities, located in the southern part of the country 124 miles from Saratov and 226 from Perm. Ufa travel guide offers interesting facts regarding the city and its people.  Read more »

Rostov on Don is beautifully located in south eastern Russia and like the name suggests, on the banks of Don River. Rostov-na-donu travel guide provides useful information regarding the city and its surroundings.  Read more »

Barnaul is a beautiful city located in Russia. It’s one of the most popular locations for tourists that like to visit Russia, because you can find everything very easily. Downtown is a very compact place and you will not have any problem in finding what you are looking for: shops, restaurants, clubs and banks....  Read more »

Barnaul was set up due to an unbelievable fortune that God left on this land. It is one of the first cities built in Serbia and its history is closely related to the Altai Mountains, located just a few kilometers away....  Read more »

If you are sick and tired of revisiting the same old places and going to the same exotic cities, then it is obvious that you need to reschedule your plans. I can bet you have never thought about Eastern Europe and even more, you have never taken into consideration Russia as your final destination. However, once you give it a try, you most certainly won’t regret it. ...  Read more »