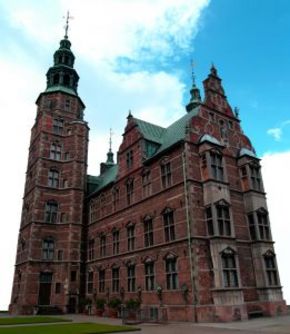 The country is formed of a continental part, named Jylland (Jutland), with many harbors, bays and fiords and around 400 islands. Only 78 of these islands are inhabited and a few larger ones are: Zealand, having the capital city on it, Fyn, Lolland, Feroe. Although it is a low land compared to the sea level (173meters is its highest point and 7 meters under the sea the lowest) and one might think it does not have spectacular landscapes, the silence given by oak and birch forests, the ice of the Baltic Sea or the agricultural, countryside view are the perfect arguments for people looking for calm during their holidays. You will discover calm is a feature for many life aspects in Denmark, be it political life (it is still a monarchy with a parliamentary system); wellbeing, with a Gross Domestic Product of around 45000 US dollars per inhabitant; life expectancy meaning 75 for men and 80 for women. Denmark is also among the greenest countries on Earth, even the production of energy is highly based on wind- an environmentally friendly method.

Around 85% of people live in towns. Although more than half of the territory is used for agriculture, the farms are highly endowed with mechanical devices. The official language is Danish, but a tourist speaking English or German will do fine, as these languages are widely spoken. 96% of the inhabitants are Danish, but small communities of Germans, other Europeans, Turks, Asians and Africans enjoy living in Denmark too. The official religion is Lutheranism, still Catholic, Muslim or Jewish rituals are practiced as well. A fine way of socializing is by drinking beer. Denmark produces 700 000 tones of this liquid per year. The most famous brand is Carlsberg.

Copenhagen is the nowadays capital of the city, but until the 15th century, Roskilde was the town of the Danish kings. The present capital city has two main symbols: Tivoli Entertainment Park and the Statue of the Mermaid- the character from Andersen’s tale. Other world famous people of Denmark are Niels Bohr –Nobel Prize winner for physics or Soren Kirkegaard- philosopher. Copenhagen also has many castles and churches attracting tourists. A picturesque district is Nyhavn (New Port) due to its many café-s reminding people of the times the navy officers and the writers were the daily customers of these places.

Denmark -When and why to visit:

For someone knowing what a torrid summer means, a maximum of 25 degrees Celsius is a perfect temperature. There are many showers and water is available in cool lakes, like the ones in Silkeborg region or in the sea. Even if you don’t mind being cold, it would be better to use these places for sailing or fishing and try one of the many swimming centers and spa-s for swimming. If you complain about the winter being too harsh in your country, try and see what it’s like at the Baltic Sea shore. However, this would be a better time to stay by the fire, in a traditional village, like Aeroskobing and listen to tales about the Scandinavian mythology.

Aarhus is one of the most important cities and ports in Denmark, located on the eastern part of peninsular Denmark at the Baltic Sea 53 miles from Odense and 65 miles from Billund. The city developed around the harbor and the coastal region, still most of the residential neighborhoods being located further inland in a beautiful forested area.  Read more »

Kobenhavn, more widely known as Copenhagen, can best be described as a metropolis with a small town soul. Despite being the capital and largest city in Denmark, Copenhagen has a peaceful, almost idyllic air. Kobenhavn is a tourist magnet for both the neighboring Swedes, and people from all over the world....  Read more »

Kobenhavn, more commonly known as Copenhagen, is the capital of Denmark, and a European centre of art, culture and entertainment to boot. Kobenhavn is the kind of town that offers to its inhabitants and its visitors all the comforts and perks of a metropolis, while retaining the intimate atmosphere of a small Old World town....  Read more »

Kobenhavn, more widely known as Copenhagen, is the beautiful capital of Denmark. This part modern, part cosmopolitan and part medieval city is one of the most worthwhile tourist destinations in the Scandinavian Peninsula. In additions to tons of sights (there is so much more to Kobenhavn than Andersen’s mermaid), this city is also a haven for shopaholics and revelers. ...  Read more »

Greve Strand is located 30 km south of the capital city, Copenhagen, 102 miles from Odense in a splendid bay, on Denmark’s island Sjælland. Surrounded by forests, the beach resort, located between the small towns of Greve and Ishøj, offers various activities on its beach such as swimming, fishing and surfing....  Read more »