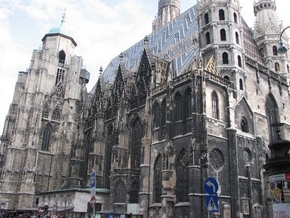 The official name is Republic of Austria, and the country’s official language is German. It is situated in Central Europe, with neighbors such as Germany, Switzerland, Liechtenstein, Hungary, Italy.

Because it is situated in the Alps, it ‘s a mountainous country, only 32% of the country being under 500 meters.

Austria has the reputation of being the birthplace of many famous composers such as Wolfgang Amadeus Mozart, Joseph Haydn, Franz Schubert, Johann Strauss, and many others. Vienna is the European capital of classical music. This country has also been the residence of many architects, painters, physicists, psychologists (Sigmund Freud), philosophers an many other famous people.

It’s not a renowned one but is variable and well balanced. Some of the typical Austrian dishes are Apfelstrudel, Wiener Schnitzel, Schweinbratel, Keiserschmarren and Tafelspitz.

The main attraction here is skiing, having lots of mountains, it also has lots of ski resorts. The most popular sport in Austria is football, although its national and club teams don’t have the desired success.

The most visited places in Austria are:

Innsbruck - it successfully blends past and present, urban and natural. Its main attraction is the Alps, but also with the medieval lanes and the Habsburg palaces. It is also a very young and vivid city, filled with pubs, gardens and cool bars at night. Or you could spend your day skiing down the Nordpark’s slopes or go super fast on Igl’s bobsled run.

Bregenzerwald – you can visit it in the summer for a quiet vacation in the countryside, or in winter for skiing. This region is filled with small villages which are well known for their hospitality and for their dairy products, especially chesse.

Salzburg – practically a shrine dedicated to Mozart. The baroque splendors and the renowned cakes make of this city a big attraction for tourists. You can go shopping, hear Mozart’s music or simply go on a carriage ride and you won’t be disappointed.

Other places you can go to are: Glossglockner Road, which takes you through marvelous countryside right to Austria’s highest peak; Tyrol’s Valley which was carved by glaciers, is a nature’s marvel; Krimml Falls famous for being Europe’s highest waterfall; Vienna the capital, old city with interesting sites and clubs, not to mention shopping; Krems an der Donau a beautiful village in the Danube Valey; Hallstatt famous for its salt mine and ice cave but also the mountains there.

If you want a fun an beautiful country where you can ski, enjoy the nightlife or go on a shopping spree if you want excitement in your vacation, or you can admire the beautiful sights, listen to relaxing music, or go for a stroll to breathe some fresh mountain air if you want a relaxing vacation, either way, Austria is the place for you.

Voitsberg is a beautiful small city located in southern Austria on the banks of Tregistbach River, near Linz and Graz. Voitsberg travel guide presents a few basic facts regarding the city and its main landmarks.  Read more »

Krems is one of the most beautiful Austrian cities, located in the northern part of the country by the Danube River, near Vienna and Graz. Krems travel guide brings to you some of the most attractive sights of the city and the main cultural activities taking place here.  Read more »

Leoben is set in the beautiful green valley of the Mur River, in central Austria. Leoben travel guide brings you the main features of this city, recognized for its mining industry and beautiful architecture.  Read more »

Ternitz is a small industrial city located in southern Austria at the meeting point of Sierning and Schwarza River. Ternitz travel guide provides a short description of the city and its main landmarks.  Read more »

Knittelfeld is a picturesque city in southern Austria dating back from the early nineteen twenties. Knittelfeld travel guide makes a short description of this small industrial town.  Read more »