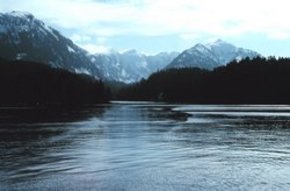 Located in the northwestern part of the USA, Alaska is the biggest state with a total area of 1.717.854 square km and also the least populated. Another paradox is that even if the state belongs to the USA it does not border it. It is best known for its harsh climate, but also for its beautiful landscape and also for its well known Iditarod Trail Sled Dog Race from Anchorage to Nome.

The warmest part of the state is around Juneau, the capital city and the climate here is oceanic and subarctic. The climate around Anchorage is also mild and this is the main reason why most people live in these areas. It is not easy to get to Juneau though as the only ways are through the air or by water and there are no roads to link the city to the other parts of the state. Even if there were debates about moving the capital to a city linked a road system, nothing has been done yet. The largest highway is Alaska Highway comprising a tunnel that links some isolated communities. Then there is Alaska Railroad an important route for the state’s economy.

Alaska Marine Highway and The Inter-Island Ferry are the main transportation systems by sea which link a lot of cities.

Most of the residents are Caucasian and the language most widely spoken is English but Native North American and other languages are also spoken. People are not very religious only 39% claiming they belong to a religion, but most of them are Evangelical Protestants.

Juneau travel guide presents important facts about the city located in the Alexander Archipelago on both sides of the Gastineau Canal and at the foothill of Mount Juneau. Gustavus and Haines are in the proximity.  Read more »

Cordova is one of the cities in Alaska situated at the southeastern boundary of Prince William Sound in the Gulf of Alaska. This is the harbor where you can see profit-making fishermen carry their daily catch. As a traveler, you may also try catching your own fish. Much more than loving this thrill in exploring the city, you may also want to see other Cordova Sights.  Read more »

Dillingham is situated in the Southwestern part of Alaska at the farthest northern point of Nushagak Bay and at the junction of the Wood and Nushagak Rivers. The only transportation available if you want to reach Dillingham is airplanes or helicopters. It is considered as a Bush fishing village and it is considered the entrance city to the Tikchik State Park....  Read more »

Spending the night in Dillingham is different from other cities in the US. In fact, if you want some time to relax, you should try visiting their hotels, that is, after you have set foot in the best restaurants around town. Restaurants and hotels comprise the best of Dillingham Nightlife.  Read more »

Ketchikan is located 500 miles north of Seattle and the first city founded in Alaska. It is also the first harbor that served many cruise ships. It has an ancient city center that is locked between water and forested mountains and has plenty of elderly visitors during summer. Sightseeing in Ketchikan give a lot of possibilities to taste the breathtaking collection of actions....  Read more »