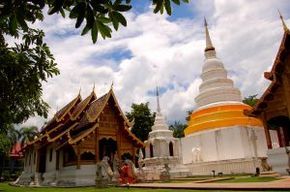 Thailand, a country with splendid scenic mountains, waterfalls, gardens, beaches and tropical rainforests boasting a wide range of activities from elephant riding, to scuba diving, from snorkeling to beach fun! Thailand is known to have a golden glow not only because the land is rich in the golden metal but also because of the glitter that the country spreads from its sandy beaches, fertile lands and warm hearted culture. Today the country is also speeding high with fabulous shopping malls, great nightlife and a fast paced city life.

· Bangkok: The capital city, known for its harmonious fusion of the old and the new, Bangkok consists of both, stylish and traditional places for you to explore. It is a modern, sophisticated city hosting a large number of shimmering Buddhist temples, magnificent palaces, and museums and galleries that will take you back to years gone by. The Siam Ocean World in Bangkok is also well known, as it is the largest aquarium in the South East Asia region. Bangkok is one of the hot destinations for those who love to shop.

· Mae Hong Son: This city is nicknamed the ‘The Town of Three Mists’ since the area is mostly covered with mist throughout the seasons. This town located between green forest slopes and high raised mountains has a scenic value with great landscapes and waterfalls.

Thailand has the second largest economy in South East Asia. With exports as one of their main contributor to the economy, agricultural exports such as rice, tapioca and rubber, and manufactured exports such as jewelry, computer and electrical appliances play a major role in the growth of economy in Thailand. The country is the world’s No.1 exporter of rice. Electric appliances, automobiles and computer components constitute the major industries that contribute to the economy.

With efficient network of rail, road and air transport, Thailand provides world class health and sanitation facilities to its people. Due to lower cost and its high standards of medical facilities, Thailand has become one of the top destinations for medical tourists who seek a cheaper, faster, more efficient solution to their medical ailments. Thailand has a good literacy rate and has a well organized system of schools and universities

Thai culture has been greatly influenced by Indian, Cambodian and Chinese cultures. In addition, the Thai culture is greatly influenced by Buddhism. With nearly 95 % of the population being Buddhists, the government has been giving a strong support to the Buddhist community. Thailand is famous for Thai Boxing and its unique cuisine that combines the four fundamental tastes, sweet, salty, sour and spice in a variety of ways to bring forth the worldwide phenomenon called ‘Thai Cuisine’.

Rayong is a beautiful city located on the shores of the Golf of Thailand and not far from the capital city of Thailand, Bangkok, but 338 miles away from Udon Thani.  Read more »

Chiang Mai is an old capital city in Thailand. It is known to be one of the most beautiful cities of the country with its breathtaking scenery in the form of mountains and hills, lakes and streams, waterfalls and fields. The city offers stunning natural attractions and the secrets of the mountains and valleys are just waiting to be explored....  Read more »

Mae Hong Son is a province in Thailand located in the northwest part of the country near Chiang Mai and Lampang. It’s a very picturesque province as most of the settlements are locate in the valleys surrounded by very tall mountains. The presence of the mountains has practically shielded this part of the country from outside influences....  Read more »

Sakon Nakhon is one of the most popular towns in Thailand and it is located within the beautiful region of Isan. Sakon Nakhon province is situated in the north eastern part of Thailand. This beautiful place has a population of only about 76,000 people....  Read more »

The history of Rayong can be traced back to 1500 BE (Buddhist Era) when the Khmer settled around that area. The Khmer establishment has been recorded as archeological evidence. Rayong was primarily mentioned in the Thai chronicles in the late Ayutthaya era in 2113 BE during the rule of Ayutthaya’s King Somdej Llra Maha Dhamaraja. The Burmese army was constantly invading Thailand....  Read more »