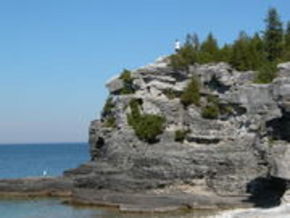 Ontario presents the urbane facet of Canada – a Canada, which is cultured and sophisticated. With big cities like Toronto and Ottawa, its galleries, museums and shopping arcades as well as its year-round carnivals and festivals, Ontario is meant for the ones who like cosmopolitan vibes and are votaries of refined pleasures. Good! But is Ontario only that? NO, for if you are the kind of person who would rather spend your vacation gazing at the Niagara Falls or at the many rainbows filling up the scenery, then be it. Ontario brings to you more of nature; at least four of the five Great Lakes border the state and then there are the many national parks and provincial parks with their spectacular vistas and resident wildlife to set eyes on. Ontario promises a lot in the form of active pursuits like canoeing, cycling, hiking and winter-sports like cross-country skiing and snow-mobiling.

Ottawa: Ottawa is the federal capital situated by the Ottawa River. The city’s prime attraction is the Parliament Hill (with its Centre Block featuring the 92 m Peace Tower). The city sights include its many government buildings/offices, memorials and heritage buildings, besides its galaxy of museums and galleries. The National Arts Center, standing by Rideau Canal, is a complete entertainment complex with its home-opera group, restaurants, studios and theaters. The Rideau Canal and the city’s other waterways, especially lakes and canals, offer varied leisure entertainment like water-sports in summertime and skating rinks during freezing winters. Ottawa is famous for its festivals – Ottawa Bluesfest, Tulip Festival and Winterlude, etc. but what people most like about this epicurean paradise is certainly its varied cuisine.

Toronto: Toronto, the provincial capital and Canada’s largest city, is a truly cosmopolitan city with multiple attractions. The city’s many landmarks, led by the CN Tower and including more recent structures like the Rogers Center and Toronto’s City Hall, present only one aspect of Toronto city tourism. The city’s other attractions include its cultural attractions like historic buildings, forts and mansions, old churches, museums, studios/galleries, operas, theaters, other entertainment venues, its many fairs and festivals as well as its recreational facilities. Toronto has many parks and public spaces. Toronto has some natural attractions like Scarborough Bluffs and Toronto Islands besides its beaches and its leafy ravines. Toronto’s nightlife is certainly something to be ecstatic about; shopaholics and teetotalers will have a field day in Toronto.

Other Popular Destinations: Ontario is just full of destinations to visit, attractions to see and things to do. Niagara Falls, one of Mother Nature’s most spectacular attractions, is an all-season attraction and a Maid of the Mist trip is just the thing you will need for a lifelong memory. Take out some time to visit the Niagara Peninsula Wine Country and taste the offerings. Then, there’s the Great Lakes’ region with their stunning beaches and planned resorts; do not miss the lake-islands like the scenic Manitoulin Island (the largest fresh-water lake island) or the Pelee Island where the Monarch butterflies stop during their annual migration every September. Tours of the Provincial Parks must be part of your itinerary.

Ontario’s rich natural resources together with its sound transportation and energy infrastructures have gifted the state’s emergence with a robust manufacturing sector that produces a bevy of products right from food and beverages to chemicals and electrical goods, motor vehicles, machinery, petroleum and coal. Services sector dominated by banking and other financial services, IT and tourism industries, make significant contributions to Ontario’s economy. Agriculture, though now much diminished in importance, is also practiced with animal farming being the chief activity; fruit cultivation and tobacco plantations are done in the coastal areas and the inland areas produce crops.

Ontario is a truly cosmopolitan state with a very cosmopolitan culture. People of multiple ethnicities, who have made Ontario their home, speak different languages, have different religious faith and follow diverse traditions/mores, but still they have made Ontario a very cultured, very sophisticated state, that gets reflected in the arts and architectures, crafts and cuisines of the Ontarians.

Located on the northern shore of Lake Ontario, Toronto is by far the most populous and diverse city in Canada. The incredible mix of ethnicities makes Toronto one of the most cosmopolitan cities in the world and is a possible explanation why Toronto is considered the entertainment capital of Canada....  Read more »

When people think about Canada, there are few things that first come to their mind: hockey, maple juice, bilingual culture and endless wilderness. Even though Canada's capital Ottawa encompasses all the above mentioned attributes, it has much more to offer: a deep insight into Canada's history, some great outdoors and a good sample of Canadian lifestyle.  Read more »

Situated in the Canadian region Ontario (region capital: Toronto) Ottawa is the capital of Canada and just the right place to start experiencing the Canadian lifestyle....  Read more »

Casselman is one of the best kept secrets of Ontario. Found in the western part of the province, the small town is less than an hour’s drive from Ottawa and minutes away from Alexandria which makes it very accessible to many tourists who want to visit Casselman. The town is also an hour away from the nearest US border....  Read more »

Red Lake is one of the very important tourist hot spots in the north western part of Ontario, Canada. It has multiple historical monuments, various natural hot spots, and different events organized every year that are enough to attract a huge number of tourists. In this guide for Red Lake Sights we will list some of the very famous spots that attract tourists and some happening annual events.  Read more »