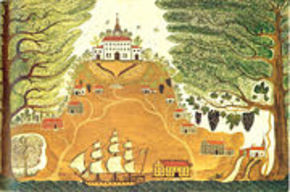 The Commonwealth of Virginia is the birthplace of 8 Presidents of the US and is known as “Old Dominion” and the “Mother of Presidents”. Virginia was founded by Virginia Company of London in 1607 and was formerly known as Virginia Colony. This state has beautiful and majestic terrain with mountains, rivers, plateaus, estuaries, plains and valleys. Thousands of caves exist for tourists to explore. The forests here a home to many species of wildlife. Much of the flora and fauna are found in the Blue Ridge Mountains and Chesapeake Bay region of the state.

Virginia’s economy is balanced with different sources of income. Computer chips are the state’s highest export item. Software and communication technology have contributed to the state’s revenue. Economy in Southern Virginia is based on the farming of tobacco, cattle and peanuts as well as military installations. Oysters form a part of the Chesapeake Bay economy and Vineyards and Wineries in Northern Neck and the Blue Ridge Mountains generate income and are tourist attractions.

Well planned transportation systems make this state one of the best in the nation. Excellent roadways and rail services connect various cities. The Pew Center on the States ranks Virginia’s modern government with an “A” because of its effective infrastructure.

Virginia’s culture has many heritages. Besides the general Southern cuisine, Virginia has its own well preserved traditions. Its wine, ham (that is protected by law and can only be made in Smithfield), architecture, and furniture are typically the colonial American type. Virginia State Fair is among the most popular festivals celebrated in the state.

Charlottesville is an interesting city that offers plenty of sightseeing. This small town about 158 kilometers from Washington hides numerous attractions. Charlottesville sights include fascinating museums, old buildings and lots more. There are guided tours available for tourists presenting them every single detail related to the sight they are visiting....  Read more »

Norfolk history is quite old – the area received its first inhabitants between 8000 and 10,000 B.C. Researchers have indicated that Paloeamericans had migrated to different parts of North America and even to parts of South America from the Sioux Falls region (the location of present-day city of Sioux Falls and its adjoining areas) around this time....  Read more »

There are few cities in the United States with such a long and glorious past as Richmond, Virginia. The first Europeans to settle on the banks of the James River, where Richmond stands today, arrived in the early 17th century and met the Powhatan Indians, who had been living, hunting and raising crops in the area for centuries....  Read more »

One of the most well-known tourist destinations worldwide is the Historic Triangle of Virginia, consisting of Yorktown, Jamestown and Williamsburg, which sits in the center of the Triangle in the region of the Hampton Roads. Carefully hidden from commercial areas, its scenic byways also connect this city to Richmond.  Read more »

If you still have energy left after enjoying your day in this city then Charlottesville Nightlife will surely be the something that you will like to try. Like many other cities, this city also has traditional styles of bars and nightclubs that will pump up your nightlife....  Read more »