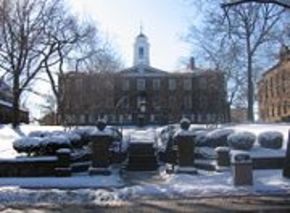 This state of New Jersey in the Mid Atlantic region of the US lies mainly between the large metropolitan areas of New York and Philadelphia. Bordered by New York in the north, the Hudson River in the east, and Pennsylvania in the west, New Jersey is one of the most densely populated states in the United States. The state was inhabited by Native Americans for over 2800 years. Early European establishments of the Dutch and Swedes made way for the English, who took control over it and named it the Province of New Jersey. The capital city Trenton was at the forefront of the industrial revolution. Scenic Trails, recreation areas, historical parks and reserves make this state a “must see” one.

This state boasts the highest percentage of the nation’s millionaire households. Per capita incomes are above the average thus ranking it 2nd in the US. The state’s economy is mainly centered on the chemical and pharmaceutical industry, food processing, electric equipment, telecommunications and tourism. New Jersey’s economy is also fuelled by the scientific and service industries. Its geographic location, natural resources, and shipping industries have all contributed to the state’s economy.

Excellent infrastructure and transportation facilities have made this state what it is today. Extensive rail and bus services, expressways, railroads, airports, ferries and interstate highways have made it one of the busiest commercial cities in the nation. The State also has some of the best public schools and colleges. Historic sites, National Parks, and Museums have made it popular with tourists.

The people of New Jersey were the first to create the “drive-in” movie, the delicious cranberry sauce, the zipper, the seedless watermelon and the ice-cream cone. The place is also the birthplace of modern inventions like the motion picture camera, FM radio, electric train and few more. The state has a long been associated with rock and rap music with a number of musicians including Frank Sinatra and Bruce Springsteen having connections with the state.

Things about New Jersey you may be interested in

So, you are all set to spend these holidays with your loved ones on a great travel destination but are still confused about the place to go? Worry no more and book your tickets and accommodation in a comfortable hotel in Paterson. This is a great travel destination that drives the attention of a large number of tourists who desire to make the best of their vacations....  Read more »

Paterson, NJ US is for sure a holiday paradise as here the tourists can check out world’s best cultural and historical attractions along with the greatest water fall of New Jersey. The great water fall in Paterson is located in the water fall district of Paterson....  Read more »

Paterson is located around 30 miles to the west of New York City and is a seat of Passaic County. The root of the city traces back to 1792, when an investment group, which called itself SUM (Society of Useful Manufactures), headed by Alexander Hamilton was formed. Alexander Hamilton is sometimes called the “Founder of Paterson”....  Read more »

Jersey City is a beautiful tourist destination in New Jersey, United States and is also the second largest city in the entire state. The land which is now called as the Jersey City was earlier inhabited by Lenape, the set of tribes. In the year 1609, Henry Hudson, trying to find an alternative route for East Asia sailed his tiny vessel at Harsimus, Weehawken Cove and Sandy Hook....  Read more »