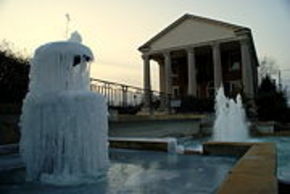 Alabama (surnamed the Yellowhammer State) with its 131, 443 km2 lies at the south-east of the Unites States, bordering Florida, the Mexican Golf, Georgia, Tennessee and Mississippi. Its name could be the combination of two Choctaw words: “Alba” and “Amo” meaning “vegetation/plants” and respectively “reaper”. Its population of 4, 4 million inhabitants is composed mostly of Americans 96, 1 % and the minorities are Spanish, Germans, French and Chinese.

Many industries have developed after the Second War II: heavy industry, ore extraction, education and high technologies. The climate is a humid subtropical one with annual average temperature of 18°C, with hot summers and mild winters and a lot of rain.

As for the transports, Alabama is crossed by 5 inner state highways connecting it with the bordering states; it also has several airports among which the biggest are Birmingham International Airport and the airport of the capital city, Montgomery Regional Airport and several ports on rivers, lakes or the Mexican Golf (Mobile Port).

Huntsville is the seat of Madison County located in the northern part of Alabama, around 135 km north of Birmingham. If you are one of the tourists who want to explore the attractive sights in Huntsville, below are some of the best tourist attractions you can enjoy while visiting the place.  Read more »

Just like any other place in the US, Muscle Shoals is not deprived of a good and enjoyable nightlife. There are places you can go at the end of the day, whether you want to listen to music, see stage plays or just drink and dine. Try to compare and contrast Muscle Shoals Nightlife with the mesmerizing Birmingham Nightlife and the captivating Montgomery Nightlife.  Read more »

Alabama must be proud to have Muscle Shoals as one of its cities. Not only will you see how people give tribute to their cultural and historical beginnings. You also have the chance to take a glimpse at how they preserve the beauty of nature....  Read more »

Huntsville Alabama is not just a beautiful sight during the day. It is also a lively city for the evening. This is perhaps typical of an evening in the US. Take a look at options in Huntsville Nightlife and compare it to those listed in Chattanooga Nightlife and Nashville Nightlife.  Read more »

Have you ever experienced the kind of nightlife offered by Panama and Montgomery? Well, whether or not you have an idea about these options, what matters is that you are given choices to have an evening of fun. If you are in Dothan, Alabama, there are certainly good catches for the rest of the evening.  Read more »