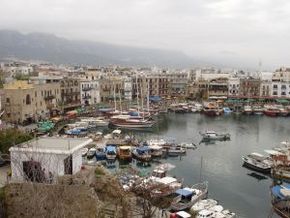 The island in the Western part of the Mediterranean Sea is formed actually by two states, although the one to the North is recognized only by the Turks. Thus the land is divided between the Greeks and the Turks, both languages being spoken in the region. The religions are Orthodox Christianity and Muslim. The Greek part is included in the European Union, also adopting the Euro, which makes it easier for a tourist. The other side of the island kept the Turkish Lira (pound). The territory includes two mountain ranges with a plain in the center. To the North East there is the Karpas Peninsula, with mountains reaching 959 meters in their highest point. To the South, there is the Troodos Peninsula, including Mount Olympus. With a height of 1951 meters, it is the most high and impressive mountain of the country.

It is said that on the white stones of Petra tou Romiou, Aphrodite was born from the sea. She is not the only important goddess claiming Cyprus as her birth place, Adonis too, and also King Cinyras, Teucer and Pygmalion. Ancient time’s spirit is to be felt also by visiting the archeological sites of Paphos and Choirokoitia. Old churches can also be admired, like for instance the ruins of the 4th century Khrissopolitissa, one of the first built on the island.

The capital of the island is Nicosia. It is situated on Pedios River. Like the territory, the capital is also divided (the only one in the world like this). To the North it is Turkish, to the South, Greek and in between there is an unmilitary zone, kept like this by UN Organistion. It is mainly a commercial city, a place to buy textiles, leather, ceramics. Close by are the copper mines.

The country’s main income producing activities are tourism and agriculture. The outstanding fruit are grapes, also under the form of the renowned wines of Troodos, citrics and carobs. There are also olive tree plantations.The animals inhabiting the island are mainly sheep. Industry is not very developed, but crafts, including lace and wood work are flourishing.

Cyprus -Pieces of advice for visiting

The island is sunny, except for three or four months during winter, when it’s a bit cold and it’s raining. Summer is really hot, although at the seaside, with the help of the breeze and following the Greek style of staying at home at noon and late in the evening, you might enjoy a pleasant holiday, without sunburns. You may go in May or in September for a milder climate. If you want to drive, take care, they have the British habit, with the steering wheel on the right!

Accomodation is not easily found during summer, although there are plenty of hotels, bed and breakfast etc, so book in advance. Regarding talking, do not worry, the great majority speaks English and they are friendly with the tourists.

Nicosia, the capital of Cyprus, is among the few cities that had been constantly inhabited for more than 4 and a half millennia. Despite its location on an island, Nicosia was far from isolated from the changes and conflicts that shaped the history of Europe....  Read more »

Nicosia is the capital of the country of Cyprus, being also its largest and most developed city. It is located in the heart of the island, right on the River Pedieos. This amazing town has worn the name of Ledra, from Antiquity till the first centuries AD; nowadays the locals call it Lefkosia....  Read more »

Cyprus is one of the biggest islands in the Mediterranean, being considered one of the most beautiful too. However, besides the more famous Nicosia Sights, or Larnaca Sights, you should save some time in order to visit another place on this wonderful island. The Achna Dam is situated to the north-west of Larnaca, right near the border between the southern Cyprus and the northern Turkish area....  Read more »

After entire days of visiting historical centers, museum and theaters, it is high time for you to meet the other side of this amazing capital, Nicosia Nightlife. It is now that you will fully understand the beauty of this unique culture, as you will get the chance to observe and even analyze they way in which these people like to spend their spare time and have fun....  Read more »

Nicosia is the capital of the country of Cyprus, being located in the center of the island, on the river Pedieos. Besides its role as the seat of the government and an important business point, Nicosia is also a popular place for shopping, restaurants and entertainment areas, at the same time, bearing traces of its agitated but glorious past.  Read more »