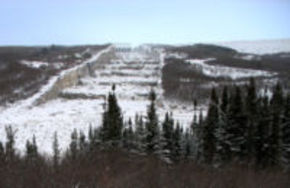 Endless beautifully colored forests, untamed rivers, captivating cities and the fascinating mix of cultures will most certainly impress you if you choose Quebec as your next vacation destination.

The immense surface of Quebec has been beautifully shaped by glaciers during the last ice age so that a characteristic local topography with a high density of lakes and streams resulted. The province is located in the Labrador Peninsula and is surrounded from almost all sides by the waters of the Atlantic Ocean. With various topography represented by ancient mountains like the Canadian Shield and the Appalachians, the Saint Lawrence River valley and the coastal region with the representative Hudson Bay, Quebec is one of the most visited Canadian provinces.

The extremes of the province are the Torngat Mountains with the highest peak in Mount d’Iberville (1652m) and Saint Lawrence Gulf with the lowest elevation.

The local climate is predominantly continental with arctic and sub arctic influences in the north and center, and oceanic influences throughout the south and western coast.

The province also comprises an important number of islands among which the most important are the Magdalen Islands, Hochelaga Archipelago and the Entry Island.

Before the Europeans arrived here, the first inhabitants of these places were nomadic Inuit and Iroquoian, famous fur traders. The population grew from only a few hundred thousand people in the nineteen century to about 7.500.000 people today, most of them of Canadian origin, Catholic Christian religion and speaking French. The vast majority lives in urban areas, especially in the main cities like Montreal, Quebec City, Gatineau, Sherbrook and work in agriculture, industry, commerce and tourism.

If you decide for Quebec as your next holiday destination, you must know that usually a visa and a valid passport are required to enter the country. You will also be requested to have onward and return tickets, documents for your next destination if necessary and enough money to support yourself during the stay.

The travelers are also advised to check with a local embassy or consulate office in order to receive the most accurate information.

The local currency is the Canadian Dollar and can be easily converted.

Quebec has a well developed transport infrastructure and also a very diverse one. You can travel here by air, using one of the international local airports like the Montreal-Mirabel International Airport, heliport or a water aerodrome for the more isolated areas. The ferries are also a good option for traveling inland Quebec, operating on some of the rivers and lakes.

You can also use the highways, roads and railways for interstate traveling and within the cities the urban public transport.

You will certainly be impressed by the province’s beauty if you decide to spend some time visiting it. Most of the tourists visit the coastal region where the high cliffs meet the sea, the numerous inland lakes and rivers for canoeing, rafting and more, the beautifully colored forests in autumn and more.

Quebec also has much appreciated ski resorts like Mont Tremblant where you could stay at Comfort Inn Ville, a perfectly located villa at just a few minutes’ distance from the ski slopes. The hotel also offers self sufficient rooms, numerous facilities for families with children and great cuisine.

You can also have a relaxing seaside vacation, choosing Paspébiac resort and Chalets Soleil sur Mer. The cottages are a dream for anyone who enjoys the sea, offering a splendid landscape, private sandy beach and maximum of privacy. If you want to spend some time away from the noise and pollution of the cities, this is the place to go. All you need to do is enjoy the sounds of the sea and relax in a magnificent atmosphere.

Trois-Rivieres, founded in 1634, is one of the oldest cities in North America, but despite all it does not present much touristic or historical importance. Most of the city’s sights and old buildings were destroyed by a fire at the beginning of the 20th century, and nowadays Trois-Rivieres is nothing more than a convenient stop on the way from Montreal to Quebec City....  Read more »

Canada is known the world over for being an extremely developed and truly cosmopolitan region. With an amalgamation of cultures and experiences and people, it is no wonder that Montréal in Canada boasts of some of the finest nightlife and partying opportunities in the continental North America....  Read more »

Quebec is one of the most popular tourist destination not only in Canada but in North America. It has a distinct characteristic in culture as well as history. Although the city is not the largest in terms of population, Quebec is the largest in Canada in terms of geographical size. The city is very distinct when compared to other cities in Canada because of their predominant use of French....  Read more »

Quebec is one of the most popular cities in North America. It has a distinct culture, language (French) and sights that will truly amaze any tourist. Your guided tour could take all day visiting key destinations but it will take more than a day to visit most tourist spots of Quebec.    Read more »

Quebec has a lot to offer when it comes to nightlife.  Travelers can choose to have a party at the bars, pubs and dance clubs.  They also have the option to spend their night at the performing arts or music lounges.Bars and Dance Clubs The city has a lot of bars and dance clubs that you can visit.  Most of them are open until two or three in the morning....  Read more »