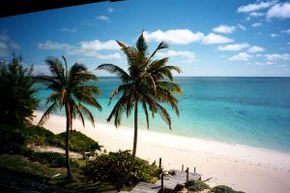 Travel Guides > Caribbean > Bahamas Travel Guide
If you are looking for an exotic but also civilized place to spend your holiday, the Bahamas is the ideal option. Consisting of a cluster of about 700 differently-sized islands of choral origin and having soft sand beaches and sky blue water, the Bahamas are a very attractive place for any tourist.

Located in Central America, in the Carribean Sea of the Atlantic and being one of the youngest states on earth as it became independent in 1973, The Bahamas has kept economic relations with the Crown and remained in The Commonwealth, a fact that helped tourism develop swiftly and qualitatively. The government from Nassau, the capital city of The Bahamas, has invested loads of money in infrastructure and tourism and transformed the islands into a real heaven for relaxation-looking westerners.

To name just two of them, the Paradise Island and the Grand Bahama island are spots where tradition, exoticism and luxury make a perfect match. For instance, the capital city of Nassau is surprisingly little touched by its close neighbour’s, the US’s cultural influences. The British tradition is the dominant feature of the islands even if here and there one can see American fast-food restaurants and Hollywood films ads. Contrastively, Freeport, another important city of the Bahamas, was completely engulfed into American style, both in the architecture and landscaping and in the way of living.

Due to the new government’s efforts concerning the infrastructure, private investors have pumped a lot of cash in either restoration or building new hotels endowing them with facilities made possible by the latest technology. Thus, Sun International turned its property into a virtual aqua world, the Hilton revived the British Colonial style accommodation while along the Lucayan strip, a never-ending range of mega hotels and casinos are being built.

Still, a drawback of these developments is the ignorance some investors manifest towards the Out Islands such as Abacos, Sandros and Bimini which are in a poor state but there are signs of improvement since lately there appeared people interested into turning these small islands into golf courses. But there is an advantage of these islands though, as many adventure-lovers come here and look for off-the-beaten-track places and these islands are really fit for that.

Another important and relatively new development the government of the Bahamas together with some private companies and environmental organizations has initiated is the eco-tourism. The Bahamas is one of the few countries that have taken real steps in to the protection of its natural heritage.

Nature-lovers shoud not hesitate to come to the Bahamas as they will have here close encounter with nature. In Great Inagua Island you may spot the now protected and previously almost extinct West Indian flamingo. Other species such as the New Providence iguana, the green turtle, the Bahamian parrot, and the white-crowned pigeon are now protected and may be seen and studied just in the Bahamas.

As far as the people are concerned, the Bahamian inhabitants as well as the staff in the tourist industry are very hospitable and courteous. The government has made great efforts to train people to be helpful and efficient with the tourists and most of them are behaving in this way. Few exceptions contradict this aspect such as drug dealing and illicit trade but the government is taking hard measures to lessen these activities.

All in all, the Bahamas are the ideal place both for nature and exotic adventurers and for luxury seekers. So, fly to Nassau, live the unique atmosphere of the Bahamas and enjoy the Atlantic.

Recent Travel Guides from the Bahamas

Nassau is not only the capital and largest city of Bahamas but it is also the centre for tourism.  The city has beautiful beachfronts, structures that represent both the earliest times and the colonial era.  In addition to these, the city has become one of the sought after travel destinations for its tropical climate, dazzling sights and cool nightlife....  Read more »

Nassau is the most popular city for tourism in the Bahamas.  Aside from the environmental beauty that every Caribbean place has, Nassau offers a variety of attractive spots.  Along this line, it is blessed with beaches, water parks and architectural spots....  Read more »

Located in a Caribbean country, Nassau can be regarded as one of the hippest places in the globe. Nightlife you say? Well, there are a lot of these in Nassau. But of course, you should not just be going to any place you see because you always have the top options to choose from.  Nightlife options  The nightlife in Nassau comes in a wide array of alternatives....  Read more »

If you are looking for a drastically different nightlife vacation, Freeport Bahamas is the place where you have to go. This tourist destination town turns amazingly vibrant and lovely once the sun goes down.  The pubs and bars will turn out their lights-on to entice everyone to party and have fun....  Read more »