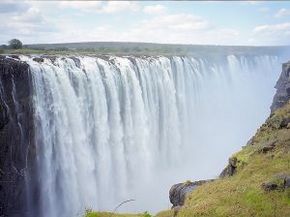 Zimbabwe’s pleasant climate, its world-renowned natural sites like the Victoria Falls, its wildlife parks and safari areas, its historic ruins like the UNESCO World Heritage Site of Great Zimbabwe once made the nation a very popular tourism heaven. Mired in thousand controversies (chiefly related to human rights abuses), Zimbabwe has now lost its credibility as a tourist-friendly nation. To worsen the situation, there’s the recent cholera threat. Nevertheless, if you are ready to brave these odds and consider touring Zimbabwe, you will discover a perfectly fascinating nation – a nation that will treat you great– be it in the form of its cuisine, its thrill-factor, its scenic-beauty or its past history. Since Zimbabwe once had a flourishing tourism industry, the tourism infrastructure is quite developed.

Zimbabwe is in a state of economic failure. Political turmoil, economic mismanagement and a flawed land reform policy has turned the once-strong African economy to a pauper-state with a high-percentage of unemployment, hyperinflation and negative GDP growth. The country is facing acute shortage of foreign exchange due to sharp decline in exports.

Agriculture was once the mainstay of Zimbabwe’s economy and the country earned handsomely from food-grains’ exports; however, now the ‘breadbasket of Africa’ is itself plagued by hunger. Zimbabwe is rich in mineral deposits like coal, copper, gold, platinum, etc. and once mineral exports was a key source of foreign currency earnings. The nation even once enjoyed a boom in tourism – both domestic and international. However, now all of Zimbabwe’s economic vehicles seem jammed and the value of the Zimbabwean Dollar has gone down to a great extent.

Zimbabwe’s infrastructure, however, is one of the best in the whole of Africa and this has something to do with the nation’s economic growth in the 1980s.

Zimbabwe is a multi-cultural country, inhabited by people belonging to different ethnic groups that follow different religions and mores and even speak different languages. While the Shona tribe is the largest ethnic group, Christianity is the religion of the majority. English is the official language of Zimbabwe but Shona and Ndebele are also used widely. Zimbabwe’s traditional art forms include handicrafts like basketry, carving, pottery, etc. Shona carvings are deemed highly world-wide.

If you are gearing up to visit Victoria Falls then we can assure you that you will be able to enjoy Mother Nature at its best while you are around this marvelous landscape. Victoria Falls Sights is all about various natural tourist attractions that are around this huge waterfall. All of them act as bonus for tourists along with the sight of the huge waterfall....  Read more »

Victoria Falls (also famous by the name Mosi – oa – Tunya which means Smoke which Thunders) should not be mistaken for a city. It is actually a very famous waterfall situated on the Zambezi River in the southern part of Africa. Its exact location is between two countries namely Zimbabwe and Zambia. At one time you might get confused as to which country this waterfall belongs to....  Read more »

Zimbabwe is quickly becoming a nation for tourism, but before you plan a trip to Harare, you should study up on the cultures and customs of the area. There is a ton of shopping to do once you get to Harare, and there are dozens of restaurants where you can try the foods of the nation. However, keep in mind that you must register with the local authorities before you enter the country....  Read more »