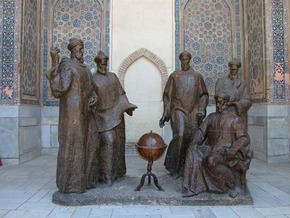 Uzbekistan, many will say, is the ultimate tourism destination…and truly so. Every year this Central Asian country receives tourists in hordes – while some are lured by its over 7000 years of rich history, others visit Uzbekistan to view its architectural treasure trove; some find its natural beauty irresistible, others cannot ignore the magnetism of the adventure-sports. For some, Uzbekistan essentially means religious pilgrimage, but for others it is purely medical tourism.

As for you, you can go visiting the nation’s UNESCO World Heritage sights like the city of Samarkand, go rock climbing or skiing in the highlands of Chimgan, roam about in the red desert lands of the Kyzylkum Desert to catch a glimpse of the rare fauna, go round the bazaars collecting Uzbek pottery, silks and other artifacts created by local artisans even as you taste the famous Uzbek cuisine. Lap it all up and Uzbekistan will promise you more in the form of its pleasant weather, warm hospitality, clean ambiance and security.

Tashkent: Tashkent, the capital city of Uzbekistan, may lack the appeal of the Great Silk Road cities but it very well represents modern Uzbekistan. The chief attractions in the national capital are its many museums and memorials like Fine Arts Museum of Uzbekistan, History Museum, Earthquake Monument, etc. Among Tashkent’s other must-see sights are the Alisher Navoi Opera and Ballet Theatre, Palace of Prince Romanov and the open-air bazaar, named, Chorsu Bazaar.

Samarkand: Samarkand, the second largest city after Tashkent, was conferred the unique honor of being a UNESCO World Heritage site in 2001. The star-attraction of Samarkand is certainly the Registan, but you should make it a point to visit the whole city for its numerous architectural/cultural wonders.

Bukhara: Bukhara, like Samarkand, is full of magnificent mosques, madrassahs, palaces and mausoleums that mesmerize you with their tall minarets, arresting blue mosaic tiles and turquoise domes. The historic city center is a UNESCO World Heritage site.

Khiva: Khiva, yet another ancient city, must find a place in your itinerary. Home of the very famous Ichon Qala (or the Old Town), Khiva was the first Uzbek-city to be enlisted as a World Heritage Site.

Apart from these, Shakhrizabs, Termez and Kokand are other Uzbek-cities that you would definitely like to visit.

Uzbekistan is one of the fast growing economies of the world but a considerable section of its population is still below the poverty line. Traditionally an agricultural society, Uzbekistan has seen immense growth of the industrial and service sectors post independence.

Speaking of infrastructure, there is a definite need to bring about improvements both in communication and transportation. Uzbekistan has more than 20 Hydroelectric Power Plants.

Uzbekistan essentially has a multi-ethnic culture and society. Uzbeks comprise about 75% of the entire population; minority groups like Karakalpaks, Kazaks, Russians, Tajiks and Tatars constitute the remaining 25% of the populace. The inhabitants, including many of the minority groups, follow Islam. The influence of Persian culture is much too apparent in the music, art and architecture of the land. Coming to sports, Uzbekistan has been the birthplace of Kurash, the Uzbek-form of wrestling.

Tashkent, Uzbekistan Night LifeTashkent, Uzbekistan offers a variety of nighttime destinations. From cultural shows to dance halls, you are bound to have some fun. During the summer months, the climate provides a festive environment of partying and street fairs. You can wander the various local streets and find a party around every corner....  Read more »

The city of Toshkent lost most of its historical monuments during two events which hit the city. First was the revolution of 1917 and second was the earthquake which hit the city somewhere in 1966. Although most of the historical era mountains were destroyed during these two events yet the city has many sights like various museums and many monuments from the Soviet Era. ...  Read more »

The city of Toshkent (known as Tashkent in English and Toshkent in local Uzbekistani Language) happens to be the capital city for Uzbekistan. It is one of those rare historical cities that lie on the famous Silk Routes which used to connect China to the Mediterranean Sea....  Read more »