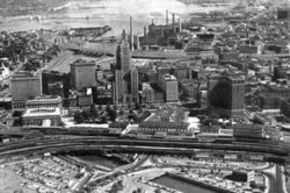 Rhode Island’s over 600 km of coastline saw the emergence of Newport city as a summer resort for the rich and the famous as early as the 19th century. Newport’s popularity has not shown any signs of waning even today and visitors continue to arrive in waves to lap up the pleasures that the 100 or so beaches and the surrounding waters offer. Although Rhode Island is known as ‘The Ocean State’ because of its proximity to the Atlantic Ocean and Narragansett Bay, the smallest state of USA has at least 60% of the land under forest-cover – woodlands that promise a wide range of activities. And then, there is the university town of Providence, which is as much famous for its historic importance and cultural heritage as for its hosts of restaurants, bars and nightlife. Gambling and casinos present an interesting and important aspect of Rhode Island travel. To add to your to-do-list in Rhode Island, there is the state’s unusual cookery to taste – just try the varied fare, otherwise your tour will be incomplete.

Providence: Providence, the state capital, is the main draw of Rhode Island tourism. Providence has many historic and cultural attractions like the State Capitol building and a whole host of colonial buildings – some private mansions/houses and some public buildings. Besides, the city is home to some of the most prestigious universities and colleges like the Brown University and Art Museum and the Rhode Island School of Design Museum. Other points of interest like the Waterplace Park and Roger Williams Park Zoo are loved across age-groups and interest-groups. Providence’s hip bars and restaurants make it a gourmand’s paradise.

Newport: Newport city is America’s first resort city that is equally famous for its beach activities/water-sports and its 19th century built summer-villas of America’s elite. Other area attractions include natural sights like the Block Island and cultural sights like the Museum of Newport History, Museum of Yachting and Touro Synagogue. The Newport Casino that houses the International Tennis Hall of Fame is no less than a pilgrimage for tennis fans. And then, there are Newport’s many musical festivals, its trendy bars and restaurants to further add to the popularity of the city.

Other Popular Destinations: Rhode Island offers much more to tourists – its many water-front beaches, off-shore islands and its protected state parks that fascinate as much with their scenic appeal as with their lures of interesting activities.

Rhode Island, in spite of being the smallest state of the United States, has long been a leading manufacturer of a variety of products including textiles, jewelry, silverware, machinery and equipments as well as rubber/plastic-made products. Today, although the manufacturing industry continues to contribute to the state’s economy, Rhode Island now also has a robust services sector apart from other key industries like Tourism and gambling. Like in earlier times, farming and fishing are still important.

Rhode Island’s transportation infrastructure has been bolstered by a number of bridges that connect the off-shore islands to the mainland. Rhode Island is served by the T.F. Green Airport; besides, there are a number of Interstate highways and auxiliary highways. You may choose to explore the state on foot, but Rhode Island Public Transit Authority (RIPTA) also arranges tours for you.

Rhode Island’s culture is essentially laced with maritime/oceanic overtones; but because the state is home to people belonging to different ancestry groups, Rhode Island’s culture also reveals influences of their distinct cultures. Although you get the feel of this superbly blended culture in the ways people’s life, the best expressions are certainly the culinary-specialties including a variety of sea-food preparations with Italian, Portuguese, Spanish flavors. These savories apart, Rhode Island also specializes in cakes and goodies and a wide variety of alcoholic and non-alcoholic beverages.

Things about Rhode Island you may be interested in

Providence, US is the capital of Rhode Island State and one of the oldest cities in the country (part of the original 13 colonies). Providence history goes back to the colonialist era, when Roger Williams, a religious refuge, founded a new town in 1636....  Read more »

Providence is actually state capital of the most densely populated US city, the Rhode Island. It is considered as the 3rd largest of the cities in the New England. Located on the mouth of Providence River that is on the Narragansett Bay the Providence city is a crisscross of small erratic streets that looks pretty in its own unique way....  Read more »

Even if the amazing state of Rhode Island is a relatively small when compared to the various other states in the United States, the Providence city includes a large number of tourist attractions that will surely entertain the residents as well as the foreign travelers. Providence is the largest city and state capital of Rhode Island....  Read more »

Providence is a wonderful city that has known a recent boom making it worth comparing with cities like Boston and New York. And while doing so you will discover differences and similarities. The similarity consists in the city having the air of a big metropolis with a prosperous and modern business and a revitalized downtown where the old buildings have regained their fame. ...  Read more »