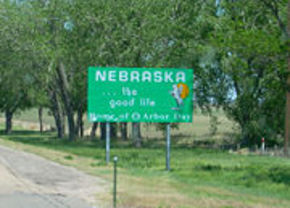 If you are on holiday in the US state of Nebraska or simply just in transit through the state, it is worth to know that Nebraska offers great deals of facilities for a dreamful holiday by providing the best accommodation and leisure amenities as well as a lot of interesting things to be seen and explored indeed.

The main goal of this Nebraska Travel Guide is just to emphasize that the plain land of Nebraska is also able to offer picturesque landscapes for hiking and exploring its beauties. Scotts Bluff National Monument, which are big rock formations right in the middle of flat land, or the 500 feet tall stone pillars known as the Chimney Rock National Historic Site still amaze the travelers by marking the end of the prairies and the beginning of the first formations of the Rocky Mountains.

A journey of exploring the Ashfall Fossil Beds State Historical Park or following the Oregon Trail for walking in the footsteps of the pioneers, are only a few of Nebraska’s attractions.

Nebraska is a landlocked state situated on the Great Plains in the midwestern part of the USA. Bordered by Wyoming to the west, Soth Dakota to the east, Iowa to the east, Missouri to the southeast and Kansas to the south, the state of Nebraska occupies the central part of the Frontier Strip, being divided into two time zones: the Central Time zone and the Mountain Time zone.

With a population estimated at about 1,783,432 inhabitants in 2008, Nebraska is divided into 93 counties. The capital city of the state is Lincoln and the largest city is Omaha, concentrating 438,646 inhabitants.

Nebraska’s territory consists of two major land regions, the Dissected Till Plains, which is a region with softly rolling hills as a result of the glaciers retreating, and the Great Plains, which occupy most of the western region and include the Sandhills, the Pine Ridge, the Rainwater Basin, the High Plains and the Wildcat Hills.

Nebraska has two kinds of climate according to its territory’s landmass. Generally Nebraska is represented by hot summers and cold winters experiencing wide seasonal variations in both temperatures and precipitation decreasing from east to west. Snowfalls are due in wintertime covering most of the state’s territory reaching a snow blanket of even 900 mm thick.

Lincoln, the capital city of the state, is one of the few large cities which are not located alongside the Platte River or the Missouri River. It has its origin near flat saline wetlands of northern Lancaster County and its recent growth made it expand on the surrounding land comprising some gently rolling hills. That’s why its name is associated with the ”salt village”, for Salt Creek, the former center of the city.

Lincoln’s landmark is the Nebraska State Capitol, one of the most impressive statehouses in the USA, an imposing skyscraper with a golden dome on its top. Rising 34 stories and being the most distinctive Capitol building in North America, it is the seat of the Nebraska Legislature and home of some important government offices.

The city of Omaha is known as being the largest city in the US state of Nebraska. Concentrating a population of about 438,646 inhabitants, Omaha lies on the Missouri River and it is also the county seat of Douglas County. Omaha is the home of some notorious landmarks as it has plenty of residential, commercial, religious and locally significant historical buildings as part of the city’s legacy. It is also famous for its historic districts such as Fort Omaha Historic District, Gold Coast Historic District, Bemis Park Historic District and many other historic districts, all of them enlisted on the National Register.

Kearney, located in Buffalo County in Nebraska, is the county seat of Buffalo County. Kearney is home to many popular sights and attractions. Every year millions of people from all over the United States and other parts of the world visit Kearney, Nebraska to explore its sights, beauty and attractions. Kearney is neighbored by many popular cities like Odessa, Elm Creek, Gibbon and Newark etc....  Read more »

Kearney is a beautiful city in the state of Nebraska. The city of Kearney is located on the north of the Platte River. It consists of Kearney counties and Buffalo. It has a population of more than 35,000 people. Kearney covers an area of 11.2 square miles. There is a large number of sights and attractions. ...  Read more »

Norfolk is one of the most aesthetically pleasant cities in Nebraska, United States. The city was established in 1868 by the river Elkhorn. This is one of the reasons why the city seems more appealing to the sojourners. Apart from the amazing natural landscapes, the city is the home to the worldwide acclaimed market of Livestock auctions as well as a large steel industry....  Read more »

Alliance is one of the bustling cities of Nebraska in North America. The city, previously known by the name of Grand Lake is located in the gorgeous Sand hills of Nebraska. The city population comprises of adequate number of children, young people, couples and senior citizens....  Read more »

Against the Current The City Of Omaha is located in Nebraska, US. The territory of the city was acquired as an including part of the Louisiana Purchase that was completed in 1803 by Thomas Jefferson. The first inhabitants of the area were the groups from Native America. These Native American groups included the Otoe, Pawnee and Sioux....  Read more »