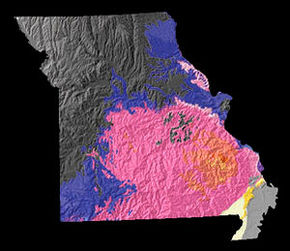 The state of Missouri is a mix of both rural and urban culture and has long been considered a “Bellwether state”. Comprising 114 counties and the independent city of St. Louis, this state is nicknamed the “Show-Me state”. Lewis and Clarke expedition started in Missouri in 1804 and this state was the 24th to be admitted in 1821 to the Union. It has both Southern and Midwestern cultural influences on account of being a border state. Its geography is varied with the Missouri River dividing the northern and southern parts.

· St Louis: St Louis is home to some fabulous attractions like the Saint Louis Zoo and the Magic House which is considered to be the nation’s most popular attraction. Other attractions are The Missouri Botanical Garden- an oasis for nature lovers, the Butterfly House, the St Louis Art Museum and of course the Crown Candy Kitchen in Old North where you can sample homemade candy, ice cream desserts and some delicious soups and salads at this “old time” soda fountain!

Major industries supporting the economy of Missouri are transportation equipment, aerospace, electrical equipment, food processing, chemicals, light manufacturing and beer. The state agricultural products are soybeans, pork, beef, dairy products, corn, hay, poultry, and eggs. Ranked 6th in the US for hog production and 7th for its cattle, Missouri has thousands of farms. Valuable resources of lead, Portland cement and coal are being mined in this state.

With excellent infrastructure, Missouri has a good system of transportation, tourism and retail trade. It is the only state to have two Federal Reserve Banks.

The 20th century brought many social changes that influenced the lives of the people of this state. The state played an important role in the evolution and origin of country music. The people of Missouri have a taste of jazz, blues, and ragtime. Branson is considered the “Mecca for country music”. Warm and friendly, the residents of this state consider themselves Midwestern in the large metropolitan areas. With a conservative, stalwart, and no credulous attitude towards rules and regulations, this state is known for its “laissez faire” regulations of tobacco and alcohol.

In 1764, René Augusta Chouteau and Pierre Laclede established Saint Louis as a fur trading post, after Louis IX, the king of France. The Soulard Farmer’s Market, which was founded in 1779, is in operation till date and prides itself on being the oldest farmer’s market in the west. Even the president, Ulysses S. Grant also used to peddle goods there.  Read more »

Springfield is the third biggest city of Missouri, US and the county seat of Greene County. The metropolitan area of Springfield is also known as ‘the Birthplace of Route 66’, ‘the Queen city of Ozarks’ and ‘the Cultural Center of Ozarks’ because of its connection with US Route 66. ...  Read more »

Springfield is the third biggest city of Missouri, offering a compelling and unique past represented in a number of sights and locations. Commemorating the bloody entry of Missouri into the 1861 Civil War, the Wilson’s Creek National Battlefield is a must visit place. ...  Read more »

Saint Louis is one of the famous cities in Missouri and has a lot of attractions for tourists to enjoy. It provides everyone with many opportunities to spend quality time. People can not only enjoy visiting the various tourist spots that are there in the city, but can also be a part of its exciting nightlife. ...  Read more »

Saint Louis is located in the state of Missouri and happens to be the second largest city in the state. It is also referred to as the ‘Gateway City’ by many people. The city experiences a large footfall of visitors from all over the world every year. There are many sights worth seeing in Saint Louis.  Read more »