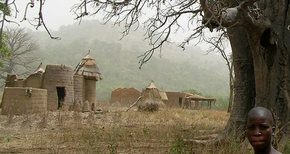 Togo is part of a category of quite fascinating African countries which are overshadowed by the touristic fame of their northern neighbors such as Tunisia or Morocco. Formerly a French colony, Togo is not exactly famous for its democratic government, and this might be one of the reasons that deter many prospective tourists from visiting the country. Despite some political unrest, Togo can be a rather pleasant holiday destination and there are many hidden treasures waiting to be discovered by the adventurous tourist. The highlights of Togo are its serene, sandy beaches, exotic villages and friendly locals. This Togo Travel Guide will give you some basic information about this West-African jewel.

You can find every possible terrain in Togo from rolling hills and savannahs to marshes and lagoons. The weather in Togo tends to be dry and quite hot, because of its tropical climate. There are two rainy seasons in Togo, in early spring and late autumn, but average rainfall is quite low even during these periods.

On the map, Togo looks like a narrow strip cradled between Ghana and Benin. Travelling to Togo is best done with a stop in Accra, Ghana, as the plane ticket will cost you considerably less than a direct flight to Lomé, Togo’s capital. If you want to get around in Togo, your only options are bush taxis, as buses are rare and there are no trains (although there are railways).

The most interesting city in Togo is Lomé, a charming colonial town that was once known as the Paris of West Africa. The nightlife in the city is very lively, and there are several sights and attractions that are worth taking a look at. However, if you want to get a taste of the genuine Togo, rent a bush taxi and visit as many villages as you can. Togoville, a fishing village is the Voodoo capital of the country, and in Aneho is a great spot for markets and bazaars.

The best way to experience Togo’s culinary delights is to stop at any of the food stalls you see on the streets. Togolese cuisine has many French, English and German influences brought in by colonists, but there are some staple products that distinguish local dishes from imported foods. Maize, cassava, millet and rice are widely used. This Togo Travel Guide recommends that you try the akume, a type of maize porridge topped with different sauces, koklo meme, grilled chicken with a spicy sauce or riz sauce d’arachide, rice with peanut sauce.

Lome is the capital city of the central western African state of Togo that has an opening to the Atlantic Ocean. This Lome travel guide will tell you all the basic information you need about this Guinea Gulf city that functions as the country’s administrative headquarters and its main port....  Read more »