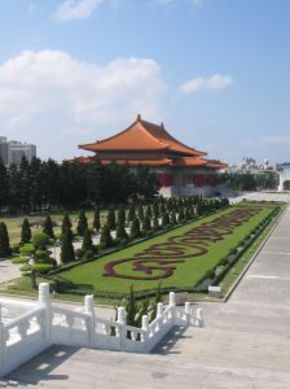 Taiwan is an island situated between the Philippines and Japan. When the Portuguese first found it, somewhere in the 16th century, they named it "Formosa" ("beautiful", that is). Being a very battled-upon land in the following hundreds of years, the Dutch, Spanish, Manchu, Japanese, British and French all longed to rule it and this explains the abundance of castles, fortresses and all sorts of battle sites nowadays.

Not only is Taiwan known for its developing and successful industry or its value as an international trade, it is also the home of Jade Mountain, reaching almost 4000m, the highest peak in Northern Asia.

The 23 million people of Taiwan, mostly Buddhists, celebrate the National Day on 10th October. Most of the population is rooted in China, having migrated from Chinese provinces Fujian and Guangdon during the Dark Ages. In the following paragraphs of the travel guide we will explore other aspects concerning Taiwan.

Although Taiwan is in the tropical and subtropical regions of the planet, its climate is maritime humid, due to the fact that the territory is surrounded by the Pacific Ocean from all sides. In the north side of the island, the climate is more temperate, and the winter season is present. You should have raincoats with you, because it rains quite a lot. The annual average temperature is a comforting 22 degrees Celsius. The best time to visit is either autumn (October-December), either spring. If you take a hike in the highest mountains of this territory, you might encounter snow, so be ready with the right gear for these conditions.

Taipei is the capital of Taiwan and also the cultural and trading center. A famous point of interest is the Taipei 101, the second tallest skyscraper in the world. Hsinchu is another city, known for the hi-tech products made here. Puli is a city located in the center of the island, a good place if you wish to visit the mountains or the well known Sun Moon Lake. Hualien is a very popular tourist destination, as well as Taichung. Also, Kaohsiung is another big city in Taiwan, having a very crowded sea port. For the history passionate, Tainan is a must see, as it is the country`s oldest city and it has numerous history sites.

The Taiwanese cuisine is majorly influenced by the provinces of China, especially from southern Fujian, but influences from all regions are equally easy to find. The other influence is Japanese, dating back when Taiwan was under Japan’s dominion, in the early 20th century. Rice and soy along with meats such as pork and beef are the usual popular ingredients. The Taiwanese beef noodle soup is probably the most common dish in Taiwan, this being a great paradox, because beef is considered dirty by traditional Buddhists (mostly the elders). You will also get the chance to try lots of seafood here, considering the geographic position, from squid and crustaceans to large fish as grouper and tuna. Fruits play their role in Taiwanese cuisine, most of them not only exotic, but exclusive to this land: papayas, citrus, carambola and melons.

Tipping is not a habit, but it is growing. In Taipei, though, restaurants and hotels charge you 10% more so no tip is expected. Have a great time in Taiwan using our travel guide.

Hsinchu, the oldest city in northern Taiwan, is unlike Taipei (the de facto capital of the Republic of China) or the other Taiwanese cities like Keelung, Kaohsiung or Taichung. Although the scenic coastal and mountainous landscape of the adjacent Hsinchu County has always been a great magnetism, Hsinchu does not boast much of cultural or traditional heritage....  Read more »

Having a rich history of almost 400 years, Hsinchu is considered the oldest city in northern Taiwan province, Republic of China. Nicknamed “Windy City” for its breezy climate, it is also famous for being the City of Technology of Taiwan. Being Taiwan’s Silicon Valley it has given Hsinchu its appeal throughout the world....  Read more »

Although it is not the typical tourist hot spot, as most of the travelers come here for conferences and the like, Hsinchu is still a good place to visit. The city is a mixture of the past and present juxtaposed together to give a very unassuming vibe despite being a highly technological area....  Read more »

Lying just within reach of Taipei, Keelung is the second largest port city situated in the northern region of the province of Taipei, Republic of China. The city is also known as Rainy Port as the area always experiences rain....  Read more »

Bordered on three sides by mountains and a vast ocean on the other, Keelung is regarded more as a defense fortress than a tourist destination. Nevertheless, the forts constructed along the harbor of the city grant its visitors a breathtaking view of the area. Likewise, natural geologic outgrowths create visually enticing Keelung Sights as well.  Read more »