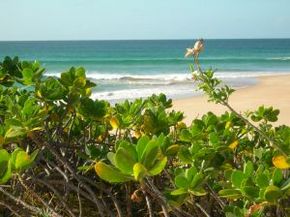 Mozambique is a Southeastern African country, with a population of approximately 21 million people that live spread on the large surface of 800.000 square kilometers. The capital of this state, and its largest city, is Maputo (1, 3 million people). The official language is Portuguese, but English is widely spoken in the majority of touristic areas. The currency used is the metical (1 Euro= approximately 30 metical). As for electricity, the European style of electric plugs is being used (220-241 Volts at 50 Hertz).

Let`s explore, in the next sections of the Mozambique travel guide other important aspects regarding this exotic country.

The climate in Mozambique is divided into two major areas: one with a hotter temperature and less precipitation on the coast and inland, where the weather is cooler but a little bit more humid. If you dislike tropical conditions, you can visit the southern part of the country, where the climate is way steadier, and the average costal temperature is of approximately 26-27 degrees Celsius. The most suitable time to get to Mozambique would be during the dry season (April through September). The temperature gets higher during the rainy season (October through March), and it also gets increasingly humid, making it more difficult to enjoy what this wonderful country has to offer.

Mozambique, Travel Guide-Things to Do

Mozambique has a very long coastline, so you have plenty of places to choose from if you want to relax by the Ocean. The waters are very clean and crystal clear, and the sand is white and warm. Favorite beaches are: Xai-Xai, Ponta do Ouro, Inhambane, Vilankulo and Malugane. You can also swim with dolphins or explore the reefs situated in the national waters. There are some great displays of tropical underwater wildlife in the reefs at Quirimbas National Park., Inhambane and the Bazaruto Archipelago.

Also, a great way to relax is through fishing. You can catch swordfish, marlin and others, especially at the Bazaruto Archipelago. If you want to see the amazing African wildlife, you need to go on a safari. There are over 12 parks in Mozambique where you can admire rhinos, elephants, lions and other exotic animals in their natural habitat.

The largest city and the main attraction when in Mozambique is the state capital. Maputo. There you can visit a colonial history museum, as well as the House of Iron, imported from Paris. There is the Botanical Garden,which exhibits thousands of endemic species and also the local markets, where you can find a unique mixture of ingredients, flavors and colors.

Xai-Xai is a popular tourist destination, mostly because of its beautiful beaches. Inhambane is yet another important city, the first official European establishment in Southern Africa. Other cities in Mozambique are: Beira, Pemba, Quelimane and Chimoio.

We hope you will benefit of a wonderful experience visiting this country using our Mozambique Travel Guide.

Maputo is the capital of Mozambique. It is located in the west part of the Maputo Bay, right where the Tembe River flows into the bay. The city is therefore an important harbor of the Indian Ocean, its economy relying on activities related to this geographical position....  Read more »

Nacala is situated in the northern coast of Mozambique and is known to be the deepest natural port on the eastern coast of the African continent. In ancient times, Mozambique Island was the capital of Mozambique. The city has now reformed as a World Heritage Site.  Read more »