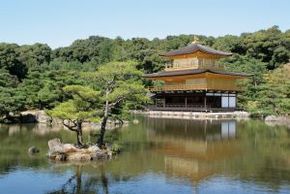 Japan the ‘Land of the Rising Sun’, has been endowed by Nature; the archipelago nation has it all – coral reefs, coastlines, mountains (even volcanic mountains), river valleys, etc. Look beyond Japan’s natural world and you will find that the East Asian country has a wealth of cultural treasures – be it architectural wonders like ancient temples, shrines, etc. or its exclusive arts and crafts like ikebana, origami, Japanese pottery, kabuki or noh (the last two are dance/dance-drama forms) or unique traditions like tea-ceremony, Japanese rock gardens, etc. The high-speed Shinkansen or bullet trains, on the contrary, introduce you to a new facade of Japan, setting it as something more than a modern city. Japan means more – delicious cuisine, sushi, kimono-clad people and unforgettable Japanese hospitality.

• Languages spoken: Japanese is the official language; other regional language

mostly Japanese dialects) too are recognized.

• Religion: About 84% of the Japan’s entire population follows either Buddhism or Shintoism. Christianity, Confucianism and Taoism are followed by a minority.

Osaka: Osaka, one of Japan’s chief industrial hubs, is a must-visit tourist destination for foodies. The highlights of Osaka tourism are its spas/wellness centers; night-owls will also like Osaka’s active nightlife. The area’s attractions include amusement/theme parks like the Universal Studios and Expoland, cultural sites and historical attractions.

Kyoto: Kyoto, the capital city of Japan until 1867, is a historically/culturally important tourist destination. The city is home to some of the historic monuments of Ancient Kyoto that have been designated UNESCO World Heritage Sites. Kyoto has many museums and gardens. The Arashiyama Monkey Park of Kyoto is famous for its resident Japanese macaque monkeys.

Hiroshima and Nagasaki – known for the destruction caused by the atomic bombs during WWII and the peace memorials.

Kobe (the famous port city) – famous for its hot-spring resorts and Kobe-beef.

Nagoya – famous for the Nagoya Castle, ancient shrines and festivals.

Nara – famous for its UNESCO World Heritage Site and wildlife.

Yakushima – famous for its seaside hot-springs and ancient cedar forest.

Japan is the world’s second largest economy with the service sector as its highest contributor (about 75% of the total GDP) in the absence of natural resources. Japan’s major industries are banking, construction, distribution, insurance, manufacturing, real-estate and telecommunications.

Japan has a sound infrastructure, which is an add-on to the high standard of living that the Japanese nationals enjoy. The infrastructure ably supports tourism.

In the past, Japan has been a culturally rich country with its typical architecture, literature, language, music, visual arts, performing arts, et al. Traditional Japanese arts and crafts like calligraphy, ikebana, lacquer ware and origami, etc. have been appreciated the world-over.

The Japanese culture of the yesteryears only had some similarities with other regional cultures; however, in the post-WWII days, features of European and North American cultures have been incorporated and this has produced a marked change especially in the fields of music and literature. Today, J-pop and karaoke are as much part of Japanese culture as Japanese folk music and recitals. Modern Japanese literature shows Western influence. Japan has produced two literary Nobel Laureates – Yasunari Kawabata (1968) and Kenzaburo Oe (1994).

Kitakyushu is a beautiful sea port located on the Kyushu Island, one of the biggest cities on the island. Kitakyushu travel guide makes a short introduction of the most important geographical, cultural and economical aspects of the city.  Read more »

Niigata lies on the northern tip of the island of Honshu on the shores of the Sea of Japan, at about 140 miles from Tokyo. Throughout Japanese history, Niigata has been one of the most important ports in the country. The city is a major transport hub, but it is far from the crowded, skyscraper-shadowed Japanese metropolises with little to show. ...  Read more »

Sendai is one of Japan’s seventeen designated cities, and the largest city in the Tohoku region. While Sendai is not quite as old as Tokyo or Osaka, is has quite a long history. Sendai’s numerous zelkova trees have earned it the nickname ‘City of Trees’....  Read more »

Matsuyama is the largest city on the island of Shikoku, one of the four largest islands of Japan. Shikoku is famous for its 88 temples, eight of which are located in or near Matsuyama. The city is a great starting point for discovering Japanese culture....  Read more »

For many people visiting Japan, Nagoya is only a bullet train stop on the way to Tokyo, Osaka, or other more touristy cities. Nagoya is indeed more of an industrial metropolis than a tourist attraction, but you don’t have to be a fan of Toyota, Honda or Mitsubishi cars to enjoy a few days of wandering around Nagoya....  Read more »