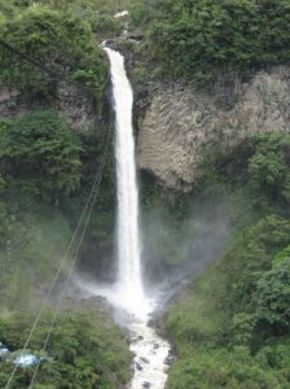 The country has everything to enchant a tourist: biodiversity, breathtaking landscapes, highland markets, traditional costumes, colonial buildings. It’s impossible not to buy an alpaca wool sweater, not to enjoy the peanut or plantain dishes, the ceviche if you like fish or the local fruit. Aguardiente is the local alcohol, produced out of sugar cane. Whenever you are traveling, spare a few days to allow yourself to get accustomed to the high altitude of the country and then start an amazing tour of history, nature, customs and architecture.

The country has a continental part, but it includes the islands of Galapagos as well. The main national parks are: Pululahua Geobotanical Reserve, Cuyabeno Wild Life Reserve, Podocarpus Natinonal Park, including Vilcabamba sacred valley, Cotopaxi Natinonal Park, sheltering the highest active volcano. The rainforest in the Amazon basin is home to a large number of animals, many unknown to entomologists or herpetologists. For instance, recently, a strange looking salamander has been discovered, but frogs, snakes and lizards are offering surprises all the time as well. The amphibians, besides being an exotic branch in the animal system, have an important role of keeping the ecosystem healthy whether we speak of water or climate. For adventure seekers, along with the jungle, active volcanoes are available to see, like for instance Tungurahua in Banos. Hot spring, waterfalls, mangrove sites, bird watching are some other choices for the tourist. If you are not looking for adrenaline, stick to the nice beaches of the Pacific Ocean.

Ecuador -Quito, or fully named San Francisco de Quito is the capital of the country. One of the most interesting means of transportations is to be used in the city: TeleferiQo. It takes tourists from the center of the city to the East side of Pichincha volcano, a place full of shops, café –s and restaurants. The city has a very well preserved historical center, including the cathedral and many churches. In fact, it is the first city mentioned in UNESCO World Heritage List. Quito also has many parks: Metropolitano, larger than New York Central Park, La Carolina, El Ejido.

The premises for the country’s economy are not very favorable: the natural conditions include the phenomenon El Nino, which periodically produces damages of billions of dollars; approximately half of the population is living at or below the poverty line. Still the country has some rich natural resources, many leaving the country: oil, fish, shrimp, gold, bananas, coffee, cocoa, tropical fruit (passion fruit, naranjilla), palm oil, rice, corn and human resources formed in the Ecuador universities. The latest success of President Rafael Correa is fooling the international markets by not paying the interest for the country’s bond, a good enough reason for price dropping and then repurchasing them at a low price. This technique helped reduce the external debt of the country and made S&P raise the rating for the country. The trust for future transactions with the country is to be analyzed later. An important aspect for travelers is that the currency is the US dollar, so there is no reason to look for exchanging points.

Guayaquil History has it that this Ecuadorian city is a relatively new one, founded in 1538 and called Muy Noble y Muy Ciudad de Santiago de Guayaquil. As almost all territories from South America, it was discovered by the Spanish, who populated it and helped to its development. ...  Read more »

The history of Cuenca is thousands of years old and according to archeological proofs various tribes who relied on hunting for their food and living were amongst the first few inhabitants. In this travel guide for Cuenca History we will summarize some of the incidents which took shape so as to give birth to this city of Cuenca and how this city progressed towards modernization.  Read more »

Cuenca has always been one of the very famous tourist attractions in Ecuador. It was due to the famous historical monuments and the great natural tourist hot spots that UNESCO tagged it World Heritage Site. We are sure that the grid layout, compactness, and the symmetry of various monuments will leave you mesmerized.  Read more »

The city of Cuenca is the capital city of the province of Azuay, Ecuador. This city is located on the highlands of Sierra, and its altitude is around 2,500 meters above sea level. It was tagged World Heritage Trust Site by UNESCO due to the huge number of historical monuments that are part of this city.  Read more »

The History of the city is said to have started in the first millennium. During its early years the famous Quito tribe used to live in this land and they were using this land as an important commercial hub. It was the year 980 A.D. when the foundation of the kingdom of Quito was made by the Caras Tribe. In 1462 the Incas tribe successfully took the control of the Quito Kingdom....  Read more »