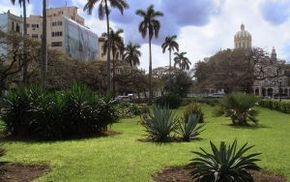 Travel Guides > Caribbean > Cuba Travel Guide
There is no other place on earth like Cuba. This Caribbean island has a special atmosphere which is apart from beaches, sand and sun and drinks (though there are plenty of them all)… it is much more than that. The main enchantment, what draws so many people here mostly, is the Cuban-feeling, due to the rich culture, political history, and the amazing attitude Cubans have towards the hardships. People try to get by day-by-day, either in developing cities, or villages where time- a vivid time- seems to have been frozen; while the blood-boiling music invigorates all souls… it is all Cuba, a unique mind-broadened country.

The diversity is impressing, what concerns the possibilities for tourists as well. You can relax on beaches, enjoy land and sea adventures, go sightseeing and exploit the wide range of artistic and cultural possibilities.

It is good to know that as Cuban currency is not internationally traded, you have to exchange money upon arrival, either at the airport or at your resort. From the two currencies: CUP (Cuban Peso) and CUC (Cuban Convertible Peso), you will use the latter one, which is the currency for tourists. American Dollars are no more exchangeable. Furthermore, if you want to make a phone call, it is recommended to use card phones, they are much cheaper than hotel phones.

The capital, Havana, is one of the oldest cities in the Americas, founded in 1514. 250 years later, it became the most beehive towns in the Western hemisphere and now Havana is one of the largest and most exciting cities of the Caribbean, part of UNESCO’s World Heritage. The surrounding district of the 19th century, the modern city center Vedado, Miramar, reminding you of Miami, the seaside Malecon are worthwhile areas to discover.

The 18th century majestic cathedral, from where you can easily find La Bodeguita del Medio, Hemingway’s favorite place; Museo de la Ciudad; Museo de Arte Colonial; other museums and forts, and of course Capitolio, modeled after the Capitol in Washington DC are just some of the highlights of Havana. You can take tours to the tobacco factory, or just relax on one of the beaches.

Havana is an amazing combination of Old and New world, of socialism and capitalism, of European, American and African tradition, of wealth and decadence. The diversity is eye-catching: you can observe it on buildings of different style, on the variety of cars, on everything. And you can’t pass untouched by the typical invigorating salsa music waving out from cafes… no wonder that Hemingway and many more couldn’t resist the temptations of the vibrant Cuban atmosphere.

One of the most beautiful provinces in Cuba is Pinar del Río, with its mogotes (a type of rounded mountain), caves, the town Pinar del Rio and the cigar factories, tobacco plantations. And you cannot leave out the Isle of Youth, which was once a hideout for pirates, and of course Veradero, Cuba’s most popular beach resort. Guama, a reconstruction of an Amero-Indian village, also merits a visit. You can have boat trips along the Treasure Lake from here; the province is a great for bird-watching, and alluring beaches wait visitors.

Visit Cienfuegos, a vivid modern harbor city, at the foot of the Escambray Mountains, and its main sights including: Parque José Martí, the cathedral, Teatro Tomás Terry, Castillo de Jagua and the Palacio de Valle, you will surely not regret.

Furthermore, another UNESCO’s World Heritage town, Trinidad is also worth a visit. Parque Martí, Museo Romántico, the ceramics workshop Taller Alfarero, Torre de Manaca Iznaga, and Playa Ancón are the major attractions of Trinidad, which preserves its colonial atmosphere. And last but definitely not the least, you must see the bustling Santa Clara and the Monument of the revered revolutionary hero Che Guevara.

Cuba is a unique country, where you will have unique experiences; you must come and get the real Cuban feeling!

Although the city of Guantánamo hasn’t progressed well on the path of economical success, ways to enjoy life have slowly started to tiptoe into this city. While you are in this city, you must enjoy Guantánamo Nightlife which has slowly become well known in the neighboring areas due to the modern trends it has started to follow. Guantánamo Nightlife - Cabaret Hanoi ...  Read more »

Various Guantánamo Sights have become very famous in the last decades due to the natural beauty and mystery attached to its sights. Guantánamo has many historical monuments and different natural hot spots which must be visited by every tourist.  Read more »

The city of Guantánamo is a municipality located in the south western region of Cuba. It is also the capital city for the province with the same name. It is one of the very important cities for Cuba in terms of economy and tourism. That’s why it was made the capital of Guantánamo province.  Read more »

You can’t talk about Cuba and forget to mention the happening nightlife. There is much more to Cuba than cigars and coffee. Santiago de Cuba boasts the greatest, hot and happening nightlife, overflowing with music and joy. ...  Read more »

Santa Clara in Cuba, is one of the most well preserved cities in all of Cuba.  It has tremendous attractions that are simply eye striking when one gazes upon their beauty.   If you are going to Santa Clara, your first stop should be Parque Vidal.  This is where all of the action of touristic sightseeing in Cuba’s Santa Clara begins....  Read more »