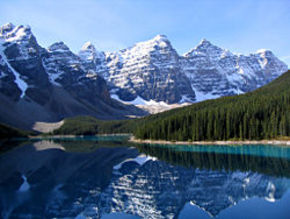 One of the most economically important Canadian provinces, Alberta will surprise you with its breathtaking sceneries, abundant wildlife and multiculturalism.

Located between the western Rocky Mountains, eastern Canadian prairie and the northern sub arctic taiga, Alberta has a dry continental climate with sub arctic influences in the north and semi arid ones in the southern regions. A particularity of Alberta’s climate is the warm and dry Chinook winds, which sometimes determine a significant increase in temperatures during winter time. Temperatures also vary according to elevation making the highest peaks of the Rocky Mountains to be snow capped all year long and the southern parts to suffer from severe draughts.

The highest point of the province is in Mount Columbia (3747m), also a main tourist resource, attracting numerous tourists with its unique landscape created by ancient glaciers that used to cover all those lands.

There are also numerous rivers like the Peace River and Athabasca River, lakes like Lake Claire and the famous Bad Lands with the stones’ gorgeous blend of colors.

Alberta is a province with numerous tourist attractions, most of them connected to nature and local culture. Here you can meet the different animal and plant species corresponding to various climatic zones and topography by visiting one of the many protected areas in the province.

The province houses one of the largest national parks in the country, the Wood Buffalo National Park, famous for its herds of bison, boreal plain and more.

The local population is a mix of nationalities from all over the world. From Anglo Saxons, Ukrainians and other Europeans to Chinese, Indians, Arabs, and Africans, are all living in good understanding and respect. About 81% of the local population lives in the main cities and only the remaining 19% live in rural areas.

The province has about 3.200.000 inhabitants and has the capital city in Edmonton, even if the largest and most important economic city is Calgary. Edmonton’s first inhabitants were fur traders and farmers, now the town has one of the most accelerated growths in the country and is considered to have one of the best economic potential for the future.

For a trip to Alberta you must know that usually a visa and a valid passport are required to enter the country. You will also be requested to have return tickets, documents for your next destination if necessary and enough money to support yourself during the stay.

Also the travelers are advised to check with a local embassy or consulate office in order to receive the most accurate information.

Alberta has hundreds of thousands of highways, roads and railroads due to large distances between cities and important economic, industrial or cultural sites. The fastest and easiest to get here is by air, using one of the two international airports in Alberta, the Calgary International Airport and Edmonton International Airport located in the two major cities of the province.

You can find here all kinds of accommodation ready to satisfy even the most demanding guests, from luxurious hotels, mountain cabins, inns, eco accommodations and more. For a relaxing holiday in the mountains you can choose Brewster’s Shadow Lake Lodge, offering simple accommodation in great log cabins with a breathtaking view over the Banff National Park and nearby skiing trail. Another possibility for a mountain getaway would be the Smoky Lake Inn, offering great accommodation, home cooked meals and many activities in the unique mountain crisp air.

A great option is also Alberta Beach Hotel, which, in spite of its name, is not located on the shores of an ocean or sea but on the shores of the Lac Ste. Ann. The hotel offers very good accommodation in a historic hotel by the water, with high quality service and many included facilities.

With such a rich natural and cultural heritage Alberta will surely impress any traveler that decides to visit it.

Famous for the Calgary Stampede (when revelers are taken around the city bars and clubs in buses till late at night), Calgary is a true party city that attracts partying crowds not only from other Alberta cities but also from nearby British Columbia cities like Cranbrook. ...  Read more »

Grande Prairie covers an area of 200 kilometers that gives it the chance of market-layout to over 250,000 people. Its population is nearly 50,000. The annual fiscal budget of the city is 63 million Canadian dollars.  Read more »

If you are in Edmonton and are craving some exciting nightlife, you are in the right place. A vibrant city, Edmonton is home to just the right number of pubs, bars, theaters and nightclubs to keep your feet tapping and your mood exuberant.  The Hip and Happening   ...  Read more »

Calgary is the largest city in Alberta and is well-known as a destination for winter sports and ecotourism. In a survey conducted by Forbes magazine the city was ranked as the “world's cleanest city” in the year 2007 Calgarians consider the Calgary Stampede as “The Greatest Outdoor Show on Earth”....  Read more »

Edmonton is a city in the province of Alberta, Canada.  It is considered as the fifth biggest metropolitan area in the country.  There are a lot of sights to behold in this dazzling city.Historical and Cultural Attractions Edmonton is rich in historical and cultural heritages.  People can witness and learn about these things through some of the landmarks and tourist spots that the city has. ...  Read more »