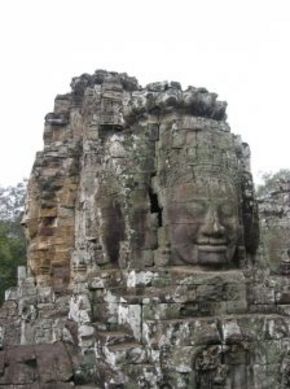 Cambodia is no longer the political cauldron it was for a substantial part of the 20th century. Today, the infamous Khmer Rouge regime, the gory warfare and the bloodshed are all a part of its past, a past that the nation re-awakened to peace is trying hard to bury and emerge as a tourism major. Speaking of Cambodia tourism, the chief draw of Cambodia’s tourism is Angkor village and its centuries’ old temples, especially the Angkor Vat (a UNESCO World Heritage site).

Of course, there is much more to explore in Cambodia than its temples and pagodas. If you are a nature-lover, go visiting the UNESCO Biosphere Reserve of Tonle Sap or some other ecosystem; Cambodia also has some world-renowned national parks and wildlife sanctuaries. Cambodia’s beaches, rivers, mountains, volcanic lakes and waterfalls, are not only parts of the natural-world, they even promise vacationing-crowds thousands of adventure-activities.

Phnom Penh: The capital city of Cambodia is just full splendid architectural marvels like the Royal Palace and the Wat Phnom. The Independence Monument built in the memory of those who sacrificed their lives for the liberty of the nation is another important sight. The National Museum is a must-visit in the itinerary for viewing Cambodia’s art and architectural treasures. Phnom Penh has a hot-and-happening nightlife scene.

Siem Reap: Siem Reap may be aptly called ‘the temple-town’ with its amazing temples like the Angkor Wat and the Bayon Temple. Siem Reap’s terraces, namely the Terrace of the Leper King and the Terrace of the Elephants are famous for their beautiful architecture. The cultural township is famous for its Apsara dance performances and its handicrafts. Other places to visit in Siem Reap are its bird sanctuary, its silk farms and its nearby fishing villages.

Sihanoukville: Sihanoukville is the beach-city of Cambodia. Its famous beaches like the Occheuteal Beach or the Victory Beach are hugely popular with leisure-travelers, but they also promise thrill and excitement through interesting watersports and activities. Sihanoukville has some of the best restaurants and waterholes worth trying-out.

Cambodia’s economy has experienced unprecedented growth over the last decade. Of late, the service sector has left behind agriculture in its contribution to the GDP. Cambodia also has a strong industrial sector. The tourism industry is developing fast and becoming one of the chief foreign currency-earners.

Agriculture is the chief occupation of the populace, especially in the rural areas. Rice is the chief agricultural product and the nation has not only achieved self-sufficiency in rice-production, but rice is also one of the chief exports. Other export-products include clothing, fish, footwear, rubber, timber and tobacco.

The recent economic growth has been marked by rapid rise of the per capita income, but it is still not enough to prevail over the ills of the nation’s grim past and so the country’s infrastructure continues to be poor, especially in the rural areas.

The culture of Cambodia reveals diverse influences. Predominant among these have been that of regional influences, chiefly that of its neighboring nations in Southeast Asia as well as India and China. The impact of religions, especially that of Buddhism and Hinduism (that spread from India) and have existed since the Angkor/Khmer period, too has been strong. The rural life of Cambodia is rife with all such influences, which manifest themselves in every aspect of life. Other influences, like that of the French colonial period and that of globalization are more evident in urban Cambodia.

If you are looking for a place of entertainment that fits you like a glove, Phnom Penh is surely the best choice you can ever make. It is indeed a small town, but it is full of life. As soon as the curtain of evening falls over the town, it turns into a place with people ready to have the fun of their life....  Read more »

Phnom Penh, the capital and the largest city of Cambodia is nowadays a flourishing cultural, economic and political centre, showing less and less signs of its rich but rather tormented history. Phnom Penh is also called the Pearl of Asia, as it is among the most picturesque tourist destinations in Asia, on par with cities such as Bangkok, Mumbai or Karachi....  Read more »

Phnom Penh is an exotic capital and the largest city of Cambodia. The “Pearl of Asia”, as it used to be known, Phnom Penh is the cultural, historic, political and economic centre of the country. Cambodia’s rich history gave birth to a unique mix of styles and cultures in the city....  Read more »

Ideally situated on the banks of the famous rivers, the Tonle Sap and the Mekong, Phnom Penh is a great travel destination to be with your loved ones. It is the Cambodian capital that features a rich and distinct culture and history. Exploring the various temples and museums is simply amazing for both residents and foreign tourists....  Read more »