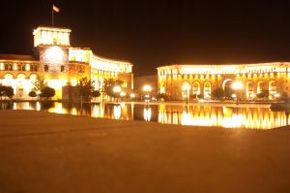 The tiny country of Armenia is located at the intersection of Eastern Europe and Western Asia. Despite the fact that it should be at a cultural crossroads, Armenia has a surprisingly homogenous population, and a rich and fascinating history. Despite being surrounded by Christian as well as Islamic countries, Armenia is a distinct entity that created for itself a unique way of life and culture. Armenia presents varied scenery and many of its tourist attractions are located in places of great natural beauty. Travelers who are interested in historical and religious sites will have a great time in Armenia, the world’s first official Christian country. Armenia is the perfect holiday destination for those who would like to discover a country relatively untainted by mainstream international culture. Armenia is a capsule that carefully preserved its heritage, and it is proud to reveal it to the curious visitor. This Armenia Travel Guide will help you discover this fascinating country and its people.

Armenia is located between the Black Sea and the Caspian Sea. The land is mountainous, but there aren’t many forests, which is not to say that there isn’t a lot of lush vegetation on the vast expanses of uninhabited area. The country is crisscrossed by many fast rivers that run through flat but elevated regions.

Summers in Armenia can be quite hot and sunny, but winters are usually harsh. If you are looking for cities where you can find museums and other entertainment, you can find all of these in Central Armenia, especially in the capital city of Yerevan. The Lake Sevan region is famous for its beaches, but also for its beautiful monasteries. Northern Armenia is another good place for visiting monasteries and monuments, but if you are looking for breath-taking landscapes, this Armenia Travel Guide recommends the southern parts of the country.

Despite the Turkish and Soviet occupations, Armenia has developed a unique and fascinating culture. Influences from the East and the West can be distinguished in what concerns architecture, art and even cuisine, but there are many details that make Armenia different from its neighbors.

Since Armenia adopted Christianity over 1700 years ago, much of the notable architecture in the country is of religious nature. The old and well-preserved monasteries found all over the country are one of the main tourist attractions of Armenia.

Carpet weaving is one of the traditional crafts of the Armenian people, and the artful carpets that are still being woven today are very popular with visitors. Music is another important aspect of Armenian life, and the Armenian Philharmonic Orchestra is highly regarded internationally. Tasting some traditional Armenian cuisine is an absolute must for any visitor. Have some Harissa, the national dish of Armenia in any traditional restaurant, and don’t forget to try out the delicious Armenia Cognac.

Yerevan Nightlife will most certainly not disappoint you. This amazing city has a wide variety of restaurants that will mesmerize you with the most exotic decors and will satisfy your preferences with the tastiest dishes you have ever tried. Ararat Restaurant is one of the most popular restaurants in Yerevan and one of the oldest too....  Read more »

The capital and largest city of Armenia, Yerevan, is best known to be a little time capsule that preserves a tiny fragment of Soviet culture, at least when it comes to architecture. What not many people know is that Yerevan is actually one of the world‘s oldest cities that has been continuously inhabited since its foundation....  Read more »

The capital of Armenia, Yerevan, is the largest city in the country and also an important tourist destination. Much of the city was built during the Soviet rule of Armenia, so many buildings in the city are examples of quality Soviet architecture combined with distinct Armenian elements....  Read more »

Yerevan, also spelled Erevan, Iravan, Erivan or Ayrivan, is the capital of Armenia. This largest city in the country is located on the Hrazdan River and has been playing the role of capital since 1918, with the beginning of the First Republic....  Read more »