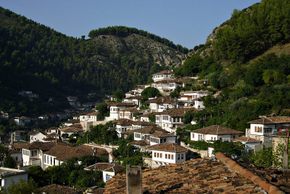 Tucked away in the heart of the Balkans, on the coast of the Adriatic Sea, Albania has been slightly overlooked by travelers. Political turmoil and economic instability have plagued the country and its people in recent history, but Albania is one of the most emblematic countries of Eastern Europe. The natural beauty of the land and the welcoming attitude of the people make Albania a perfect holiday destination for those who are willing to discover the charms of Albanian culture. The numerous world heritage sites, museums, and cities with lively nightlife are what make Albania a must-see country for tourists who are interested in Eastern Europe. Due to its isolated, rugged landscape, Albania has been called the “Tibet of Europe”, but the country has become more and more accessible to visitors, without losing any of its mystery and attractiveness. This Albania Travel Guide will help you discover a bit more about this exciting land and its people.

Albania has an impressive coastline of over 350 km bordering the Adriatic and Ionian Seas. Mellow lowlands stretch along the coast, but the rest of the country is mountainous and jagged. Due to the diversity of its geographical features, Albania has a variety of climates. In the lowlands, summers are mild and pleasant, and winters are not very chilly. However, up in the mountains and in the valleys, you can expect anything from scorching heat during the day and bitter cold in the night. The weather in Albania is quite rainy, and massive thunderstorms are not rare. There are many charming villages hidden away in nooks in the mountains, but roads are not always very accessible, robbing the tourists of Albania’s most delightful treasures.

Lake Ohrid, which is shared with Macedonia, is one of the country’s most important geographical landmarks. The lake is one of the deepest and oldest on the continent, and it is also a world heritage site. However, while rural life is an important part of Albanian culture, the country’s major cities are well connected with each other. Tirana, Shkoder and Sarande are great places for sightseeing and nightlife, while Durres, Fier, Berat, Gjirokester are exquisite time capsules that preserve bits of the country’s history.

Folklore is cherished by the Albanian people, and old stories and traditions are still being passed down from parents to children. The Albanian people, like many other nations from the Balkans, consider traditional music, dance and crafts to be one of their most prized cultural possessions. Styles of music, dance, art and even folk dress differ according to region. The traditional values among the people are family, and respect towards elders and strangers. Albanians are famous for their hospitality, and guests are treated with great respect. Albanian cuisine draws on Turkish, Greek and Italian influences. This Albania Travel Guide recommends that you taste some dolma, a traditional dish made of grape leaves stuffed with rice, and the baklava, a dessert inherited from the Turks, made of thin layers of dough filled with nuts and doused in syrup.

Shkoder is a city surrounded by water, located at the northwestern border of Albania neighboring Serbia and Montenegro. Tirana is only 46 miles away while Ohrid, Macedonia is situated 90 miles away. The surrounding mountains, Shkoder Lake and Buna River offer captivating scenery to any visitor.  Read more »

Durres is a beautiful Albanian city located in the central western part of the country on the shores of the Adriatic Sea. The closest cities are Ohrid, Macedonia 73 miles away, and Dubrovnik, Croatia, 103 miles away. Durres travel guide includes other useful information presented below.  Read more »

The city is located in the district with the same name in the eastern part of Albania, 48 miles from Ohrid and 113 miles from Skopie.  Read more »

The city of Korce, the capital of the district with the same name, is located in the southeastern part of Albania. This seventh largest city in the country traces its roots from different events. Take a glimpse at what transpired in the course of Korce History.  Read more »

Korce may be a world away from Albania’s capital, but it sure offer many sights to visit. Although it is a relatively small city, it is still packed with some of Albania’s most remarkable tourist attractions. Just like Tirana, Korce has excellent museums, striking old churches and outdoor attractions waiting to be discovered by anyone with a keen eye for beauty.  Read more »