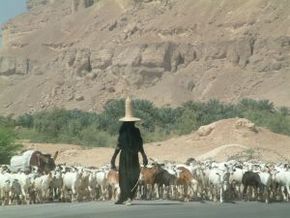 Yemen is a destination for people endowed with adventure spirit and thirst of knowledge regarding the Arabian culture. Dangers like terrorist attacks, malaria, lack of drinking water, and sand storms are to be taken into account when considering visiting this country. However, those determined to go will be rewarded with unforgettable historical places, beautiful beaches and coral reef at the Red Sea shore and welcoming people. Some say it is the undiscovered gem of Arabia.

The Monetary Fund and World Bank are present in the country in order to implement structural reforms and contribute to the development of other industries beside oil extraction and processing. The main economic activities are agriculture and fishing, done with little productivity, only for the purpose of surviving. There are also problems respecting the human rights. Women getting married early and not being employed are just a part of the problem. All kinds of abuses and cruel/inhuman treatments are ways of doing business in this country.

The capital city Sana’a is a fine mixture of old and new, sheltering the Grand Mosque, the National Museum, the Dar al- Shukr Palace and a 7th century citadel Qasr-al Silah. Old city walls, some pre-Islamic (Sabean) and mosques are waiting to be discovered in spots like Rawdha, Taizz, Amran or Sadah. Harbors such as Aden and Hadeida, although modern, still allow the possibility of seeing wooden boats, built in the same ancient manner for hundreds of years. The way of fishing is also unchanged. If you prefer a wilder holiday, climb Shahara (around 3000 meters), visit Socotra Island to see wildlife or go admire Mareb dam, an impressive construction that has helped people irrigate the land for hundreds of years.

The main dishes, as in most Arabian countries, include vegetables, rice, lamb and fish in coast regions. Raisins and peanuts are added in a lot of cooked foods. Salta, a sort of herb stew can be considered the national food of Yemen. Coffee can be served as Quishr, cinnamon, ginger and clove being the extra ingredients of this drink. Qat is a local bush largely cultivated, whose buds are chewed to obtain an effect similar to that of coffee. You may eat and drink whatever and wherever you wish, just remember not to do it in public during the Ramadan. The same goes for drinking and smoking.

Try to enjoy the local atmosphere by integrating yourself, not by standing out. Wear simple clothes; try to cover your body as much as possible. Adopting the local outfit is not necessarily a sign of respect as you will discover you feel cooler like this and will avoid sunburns. Do not take pictures of women, authorities or military settlements. If you go to the North, think first that the region is inhabited only by nomads; the border with Saudi Arabia has only recently been settled and even the simple sight of armed people is not pleasant. The traditional weapon is jambia- a dagger, but it is largely replaced with fire weapons. In isolated areas, kidnapping by some tribes has been reported.

Sana, the capital of the Republic of Yemen, is one of the richest cities in the Arabian Peninsula, both culturally and architecturally, so visiting it is sure to give you great satisfaction. The first written references to the city date back to the 1st century AD, but archeological evidence proves that the city has existed since the 6th century BC....  Read more »

This Sana travel guide will give you all the information you need when travelling to the magical city filled with history that functions as the capital of Yemen. Yemen is the only republic state in the Arabian Peninsula and it has over 23 million inhabitants spread over the main territory and over 200 islands....  Read more »

Taiz is situated in the Yemen Highlands. It is the capital city of Taiz Governorate, namely Yemen. The city is located at a height of 1500 meters above the sea level. It is located at the foot of Saber Mountain, which is 3000 meters above the sea level. This beautiful city lies very close to the Red Sea and houses around 470,000 permanent inhabitants....  Read more »

Ta'izz: Calm Night Life  Ta’izz is the third largest city in Yemen and great Islamic learning center. While it incorporates much of the internationalization with excellent roads and an international airport, it has no serious nightlife as compared to other cities of attraction in different non-Islamic countries. ...  Read more »