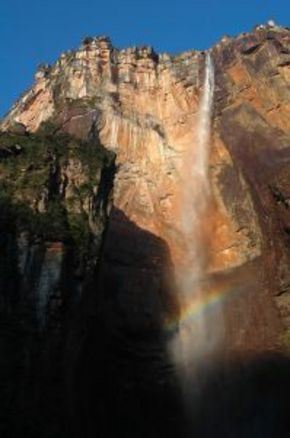 Venezuela astounds one with its biodiversity. The Pre-Cambrian flat-topped mountains (tepuis) are indeed unique in Venezuela (the world’s highest waterfall; the Angel Falls plunges from the top of one such tepui in Parque Nacional Canaima). However, the South American country has almost every physical feature – off-shore isles, beaches (playas), wetlands, mountain peaks, lakes, water-falls, river-systems, inner fertile plains (Llanos), deserts as well as sand-dunes and an abundance of flora and fauna.

Venezuela, however, is as much a nature-lover’s paradise as a modern urbanized country. So, if your days bound in adventure activities like hiking, snorkeling, scuba diving, windsurfing, paragliding, Venezuela also comes forward with promises of varied night-time entertainment in the form of night-clubs and pubs as well as quality shopping.

By virtue of its petroleum-trade, Venezuela was once the strongest economy in Latin America and the Venezuelans enjoyed a high standard of living. However, fall in petroleum prices combined with widespread corruption, mismanagement and political instability, led to the undoing of the Venezuelan economy. Attempts are on to revamp the economy through diversification; although the petroleum sector still dominates the economy, the government is also tapping its wealth of natural resources (other than petroleum); the industrial as well as the services sectors are being developed.

Venezuela has an extensive road-network, but rail-transportation is very weak, spread over only a few hundred Kilometers. Telecommunications is well developed.

Venezuelan culture is the blend of cultural influences of the people/ethnic-groups that have shaped the history of Venezuela – predominant among these have been the influence of the indigenous American Indians, of the Spanish settlers and that of the African slave population brought here. This cultural mix has given Venezuelan a new identity and today Venezuela has its unique architecture, art and crafts, cuisine, literature, music and even a unique way of life.

The capital of Azoategui State in Venezuela, Barcelona is an important city, having a total population of around 100 thousand inhabitants which makes it together with Caracas, Valencia and Guanta one of the main urban areas in Venezuela. It is a young city being founded in the 17th century and still preserving a colonial architecture. ...  Read more »

Planning to visit Venezuela? It is important to point out that Venezuela is not just confined to Caracas or Valencia, there are more beautiful places in the country for you to explore. The hidden beauty of the cities here will leave you surprised. One such city that most of the tourist omit, but it is one of the most stunning places of Venezuela is Barcelona....  Read more »

Caracas, the capital of Venezuela, is the best proof why the country is called the land of contrasts. While it isn’t one of the top tourist destinations in Venezuela, Caracas is a very interesting city steeped in history. Nestled at the foot of Mount Avila, surrounded by beautiful natural spots, the city looks like an urban oasis in a sea of green....  Read more »

The foundation of Maracaibo is due to the German conquiztador Ambrosius Ehinger, who made an expedition to Lake Maracaibo and settled down in what he then called “New Nuremberg” in August 1529. The settlement was made on the Western side of the lake, which is known for its oil resources and favorable winds, thus giving it an excellent harbor location....  Read more »

We are in Venezuela, and the city of Valencia has very interesting sights to offer, both from its natural environment and religious background as well as from its cultural heritage and monuments. Being located in a valley, the geographical surroundings make up for what is probably the most spectacular Valencia sights, the mountains and the lake that surround the city....  Read more »