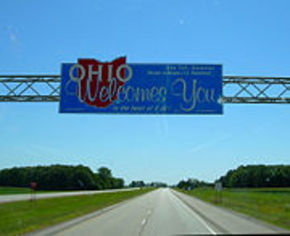 Also known as the ‘Buckeye State’ largely due to the ‘Ohio Buckeye Trees’, Ohio is the 34th largest state, and also the 7th most populous state in the United States. It has a range of museums on history and science that showcases history on topics ranging from presidential history, pre historic & Native American history to space race history and the air force history. It is also a haven for sports enthusiasts and adrenaline junkies due to college football and pro football games and the heart thumping roller coaster rides that are widely enjoyed by the locals as well as tourists who visit the state.

Ohio’s economy is rated as the seventh largest economy in the US. As far as GDP is concerned, financial activities and the manufacturing industry reigns as the top industries contributing to Ohio ’s economy, while trade, transportation, health care and education are the major industries that employ the majority of the Ohio work force. Many of the top manufacturing companies like Procter & Gamble, Abercrombie & Fitch, Goodyear Tire & Rubber, etc have their headquarters based in Ohio.

Ohio is home to a highly developed and planned network of interstate highways and roads. These highways have played a very important role in the development of the city, especially the Lincoln Highway (U.S Highway 30) which connected Ohio to many other major states and the Historic National Road (U.S Route 40). Ohio has 6 commercial airports with the Cleveland-Hopkins International Airport being its star provider.

Ohio and its people enjoy a healthy dose of culture in terms of arts arts. Concerts are held throughout the year in the state as well as exhibitions that display art works of painters and sculptors. Ohio is also known for its cuisine and the way the locals celebrate life with their many festivals throughout the year.

Columbus is the capital of Ohio and the largest city in the state (other US cities named with the same name are Columbus, Mississippi and Columbus, Georgia). Situated right in the center of Ohio State, Columbus was founded in the early 19th century in order to serve as a capital for the newly formed state. Columbus’ official birth date is February, 14, 1812. ...  Read more »

The adage ‘it is not a happening area’ has time and again been proved wrong, as Dayton is no less than others when it comes to nightlife. For people, who are crazy about music, movies, foods and drinks or even those, who die to meet celebrities, Dayton has everything to offer.  Read more »

Over the years, Dayton has rapidly become a modern community. Today’s Dayton is not at all rooted and filled in the history of past. However, many of the special and regular events of this beautiful town have their base in its history. The annual festival of pasta and noodles is held in the month of May. It is sponsored by the ‘Dayton Area Chamber of Commerce’....  Read more »

Dayton, also known as the ‘Gem City’, is located in the Montgomery County of Ohio, with a population close to 160,000. The city has got a rich heritage of innovations and inventions and the recorded per capita is more than any other city of the nation....  Read more »