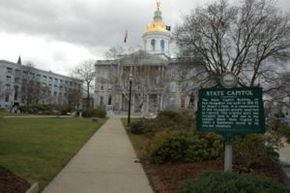 Due to its location in the north east of the United States on the shores of the Atlantic Ocean, New Hampshire has a four season humid continental climate with warm summers and cold winters. Humidity is the same throughout the year due to the presence of the Atlantic Ocean. Both temperature and precipitations vary with elevation so that on Mount Washington Peak (1917m) located in the White Mountains, winters are harsher and summers cooler.

A few important rivers cross the state like the Merrimack River, Connecticut River and the Piscataqua River, great places for water sports and other related activities.

The state also has a number of four islands located 16 km offshore, they are part of the Isles of Shoals and have strong cultural significance.

Local flora and fauna is rich and diverse represented by important areas of forests and marine, alpine and hydrophilic species of animal and plants. Tourists can visit some of the natural parks of this state protecting certain species or ecosystems like the Great Bay National Estuarine Research Reserve, Lost River Reservation or Sheldrick Forest Preserve.

New Hampshire numbers about 1.300.000 people, most of them living in urban areas like the capital city of Concord or other large cities like Pembroke, Nashua or Manchester. Most of the people are of French Canadian ancestry and are Catholic Christians.

The vast majority of locals work in industry, tourism and agriculture, having one of the highest average incomes in the country.

In order to spend some time in New Hampshire you must know that a visa is required for almost any nationality, and also a valid machine readable passport. Some nationalities need also return or onward destination tickets. Visas should be obtained before departure by contacting a local embassy or a local consulate office.

The regional currency is the American dollar which can be converted at any local bank, hotel or exchange office.

New Hampshire has a very well developed transport infrastructure made up of numerous interstate highways and roads. The railroads are here since the nineteenth century and are still a very frequently used mean of transport. The fastest and easiest way to get to this state is by air using one of the numerous international airports, the most important being the Portsmouth International Airport.

Transport by water is also an option here due to the state’s opening to the ocean. Tourists can rent a charter boat for fishing, diving or whale watching trips, can use the ferry to get to the Isles of Shoals or go on a cruise.

With its beautiful places to visit, vivid nature and hospitable people, New Hampshire is the favorite vacation destination of many tourists. The most famous resort here is Hampton, a beautiful town on the shores of the Atlantic, the summer refuge for many people living in the neighbor states. If you want to visit Hampton you can stay at Shirley by the Sea Inn & Motel, offering seasonal accommodation from May to October in clean rooms with all necessary facilities, beautiful view over the ocean and only five minutes away from the beach.

If you want to spend your winter holiday here then a ski resort is the best choice. Riverbank Motel and Cabins is a motel open all year around including winter and offers besides the great accommodation in the motel or in cabins, the gorgeous presence of the White Mountains covered with forests and the vicinity of several ski slopes. The facility also has a children’s playground and indoor pool, thus making it perfect for family vacations.

New Hampshire is a great holiday destination due to its varied topography and changing landscape according to season, a place where you can have new experiences and meet great people.

Things about New Hampshire you may be interested in

Manchester, UT is amazingly active and beautiful at night. A mug full of chilled beer would certainly relax you in the city. A classic martini or a glass of pinot noir with friends would be the ideal way to unwind. The nights in Manchester are reputed to never end and the clubs made it possible. There are many classy pubs and clubs catering to the needs of the young and trendy.  Read more »

Manchester is a city known for its cotton mills and textile industries. The first cotton spinning mill was opened here in 1804. The city is a cultural hub of the region and has a variety of landmarks that can be enjoyed by an entire family. The city is famous for its wide arts community and sizzling nightclubs. The city has many places of interests that can be visited.  Read more »

Portsmouth is a picturesque little seaside city whose symbol was chosen to be the tugboat, probably because the city was a major center for the region's maritime trade exporting of wood and dried fish to Europe. In the 19th century, the city’s income generator was regional trade and the building of U.S. Navy submarines become a profitable business. ...  Read more »

Named after the city in England, Manchester is the largest city in the state of New Hampshire located on the banks of the Merrimack River in Hillsborough County. The city retains many reminders of its bustling past as it still is an important textile manufacturing center....  Read more »