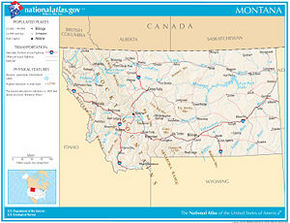 ‘Montana Tourism’ is in a way ‘Nature-tourism at its best’. The western region of Montana (which is Spanish for mountains), is entirely mountainous, comprising mountain ranges that are mostly part of the Rocky Mountain Ranges. Of course, a solid 60% of the land area is prairie land and then there are Montana’s glaciers, lakes, rivers, valleys and waterfalls, etc. which together make the natural panorama of the state invigorating.

Those who are still not ready to give in to the beckoning of nature, will be tempted by the thrill of outdoor activities like fishing (mostly fly-fishing) in summer and skiing in winter. Montana’s world-renowned national parks, wildlife refuges and forests hold similar pleasures for you. And then there are Montana’s picturesque towns – some Native American Reserves and other historic towns – that give a good understanding of the cultural heritage and traditions of the people.

Billings: Billings is not just the largest city and economic hub of Montana, but also the star-attraction of Montana State Tourism. Billings, being a big city, has everything – big hotels, motels, bars, clubs and even a few sports complexes, galleries, museums as well as a zoo; nevertheless, it is rendered quite distinct because of its scenic setting. Billings is a good base to explore nearby attractions like the Yellowstone National Park, Pompey's Pillar National Monument, Pictograph Cave, Little Bighorn Battlefield National Monument and Chief Plenty Coups State Park.

Other Popular Destinations: Montana has a few more interesting destinations like Bozeman – a trendy place with the mixed-trappings of a city and a town. Missoula, the Garden City that houses the University of Montana, is as much famous for its multiple lures of adventure sports like hang-gliding and rock climbing as it is for its lively nightlife scenario. With its ice-fields, azure lakes and gushing waterfalls, the Glacier National Park is one of a kind; the World Heritage Site is home to fauna typical of the region and seeing black bears, elks, grizzlies is pretty common. Moreover, there are Montana’s many Indian Reserves like Blackfeet Indian Reservation and Northern Cheyenne Indian Reservation.

Montana’s economy is mainly based on agriculture and its chief produces include everything from cereals to fruits and vegetables; cattle-ranching is also practiced in this state. Beer brewing is also very popular in Montana, as is mining and lumbering. Tourism too is a big currency earner for the state with its multiple attractions.

Montana’s cities and towns are well connected to each other and to other important US regions through networks of highways and rail-roads. Montana is also served by Amtrak. The state also has a number of commercial airports.

Montana has a sizeable Native American population other than people of European ancestry and Hispanics. Fortunately, the states’ culture reflects this unique mix of cultures, where each culture has maintained its individuality side-by-side enriching Montana’s culture as a whole. If the Native American tribes (restricted mostly in reserves) like Blackfeet, Crow and Cheyenne, have kept alive their tradition by sticking to their attires, arts and crafts or their rituals and habits, Montana’s art galleries also exhibit art-pieces that can be categorized as 100% contemporary art. The majority of the population follows Christianity.

Billings or 'The Magic City', named this way for its fast development during the late 19th century, becomes even more magical at nightfall. Billings’ nightlife has a lot to offer, from noisy social bars to sophisticated restaurants, not to mention a wide range of cultural events.  Read more »

The second major metropolitan area in the state of Montana (state capital Helena) and a city with a bohemian reputation, Missoula has its own story to tell. Missoula’s history begins with an interesting encounter between the Salish Indians and the members of the Lewis and Clark expedition in 1805....  Read more »

There cannot be an experienced tourist that hasn’t yet heard about Yellowstone National Park, but there are few who have ever visited the town adjacent to this area, called West Yellowstone. This beautiful city, with bitterly cold winters and mild summers is located in Montana, in Gallatin County....  Read more »

Missoula is a fun place to experience a highly unique kind of nightlife, with its stunning ambience reminiscent to that of the old Western crowd and similar to the traditional feel of Butte nightlife. With Missoula’s completely mountainous area and scenic beauties, it promises to be an oasis for tourists, even during the night. ...  Read more »

Like Billings, Missoula and many Montana cities, Bozeman is deeply rooted into the history of the West, and still carries many traces of the old Western lifestyle. The city was founded by pioneers who brought cattle from the South into the rich and immense plains of Montana....  Read more »