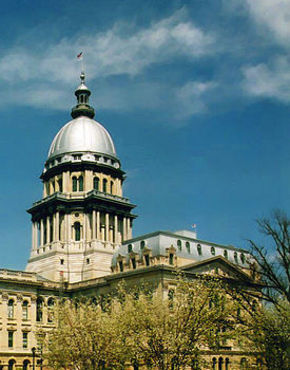 Illinois (surnamed Land of Lincoln or The Priairie State) is a Middle West State of the United States of America and it is bordered by Lake Michigan, Wisconsin, Iowa, Missouri, Kentucky and Indiana. The name comes from the Indian “Algonquin” meaning „warrior, courageous man”. With its 140,998 km² it has 12,831,970 inhabitants (ranked 5th) more than the fifth part of the population being concentrated in Chicago, the third city in the States, and its second industrial centre. Many important American companies have their headquarters here: Boeing, McDonalds, United Airlines or Motorola. Besides Chicago, there are also important cities such as Springfield (the capital of the state), Aurora, Rockford, Naperville or Peoria.

The climate is humid continental with hot summers and cool winters. It also has quite a lot of thunder activity and tornadoes.

Outside Chicago the state remains mainly agricultural, with important cereal crops and breeding (pigs, sheep, and caws). As for industry the center of the state is the headquarter of two giants of machinery and equipment: John Deere and Caterpillar.

Illinois can proudly say to be home of Abraham Lincoln Presidential Library and Museum in Springfield, the largest library in the US. Sports are also very popular, baseball or basketball teams like Blackhawks, Chicago Bulls, White Sox or the Bears are teams that accompany fans’ life forever.

With some of the best eateries, bars, clubs and other entertainment venues in the Quad Cities, Moline nightlife means jam-packed engagement and entertainment – if you are a teetotaler, go enjoy your food or just catch a live show; walk straight into a casino if you like gambling or just get to know the local people....  Read more »

It is true that Moline is not mentioned along with Illinois’s top tourism destinations like Chicago, Peoria, Rockford or Springfield; nevertheless, since the 1990s local authorities have focused their efforts at developing the city’s tourism sector and present-day Moline makes for quite a nice break....  Read more »

Moline history is not very old – it dates back to the 18th century when the Sauk and Fox Indians settled by the bank of the Rock River. The early decades of the 19th century, however, saw their peaceful existence in jeopardy with the arrival of white-settlers; things took such an ugly turn that the Indian Chief Black Hawk declared war against the United States in 1832....  Read more »

Aurora, the second largest city in the state of Illinois, United States, lies on the banks of the Fox River near Syracuse. It has about 168,180 inhabitants and it is part of Chicagoland. Its actual nickname was adopted at the beginning of the 20th century as a result of the fact that the city was the first to implement electric street lighting in 1881. ...  Read more »

Decatur is the largest city in Macon County, in the U.S state of Illinois. Called “The Soybean Capital of the World”, it was founded in 1823 and it has a metropolitan area population reaching 110.000 inhabitants. Being located in the Heart of Illinois along with Forsyth, it is the perfect hub to explore the central part of the state....  Read more »