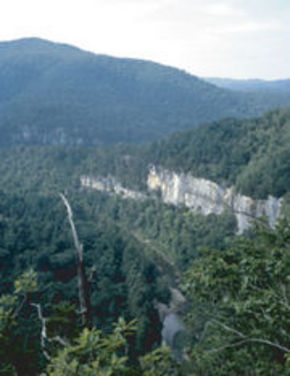 One of the western states of the Unites States of America, Arkansas with its capital in Little Rock has a population of 2, 673, 400 inhabitants (as per census 2000, the 32nd among the other states). As for its surface, it is ranked as the 29th state with 137, 732 km². Its name comes from the tribe of Arkansa of the Quapaw Indians.

With various landscapes from the Boston Mountains in the north-west to the Ozark Plateau, Arkansas has fertile lands and regions protected by the National Park System: Buffalo National River or Hot Sprins National Park. They host some of the living symbols of Arkansas: the pine, the apple flower, the European bee and the Virginian stag.

The climate is humid subtropical with mild winters and hot and humid summers. It is favorable for farming; in fact Arkansas remains an agricultural state with soya, cotton and rice crops. There are also industries such as papermaking, sawmill and textiles.

Arkansas is a worthwhile visiting state where you can drink a lot of milk, dance the state dance, i.e. the square dance, try to buy the state stone, the diamond, learn to play the state instrument, the fiddle and sing along with its welcoming locals « Arkansas (You Run Deep In Me) »

Fayetteville, the third largest city of the US state of Arkansas (after Little Rock and Fort Smith), has come a long way since it was first settled by European Americans in the 1820s. The region, which was originally inhabited by Osage Indians before becoming a part of the Cherokee Territory in 1817, is now ranked among the ‘Best American Cities to Live, Work and Play’....  Read more »

Little Rock was formally founded as a settlement only in 1821, but the area had been named almost a century earlier in 1722 and human habitation in the region dates back to the Stone Age (excavations in the region unearthed Stone Age pottery, artifacts, etc.)....  Read more »

Located at the foothills of the Ozark Mountains, Fayetteville, AR US is the southernmost city in Northwest Arkansas. It occupies the third place in the state, from the point of view of its population and represents the county seat of Washington County....  Read more »

Like some of the not – so – famous cities of the United States, Fort Smith isn’t so famous around the country, as it is still developing. It has some newly opened bars and nightclubs that are trying hard to deliver nightlife experience to its customers as it happens in various metro cities, but it will still take some time....  Read more »