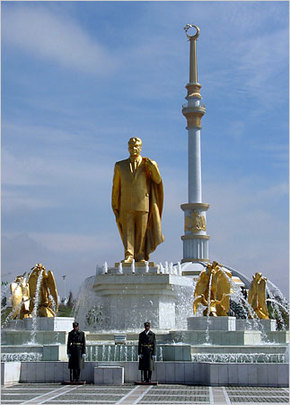 The country is not a classic tourist destination. It is only now beginning to recover from the Russian occupation which lasted till 1991 and the abuses of former president Saparmurat Niyazov. Tourism is encouraged, but it is just the bud of what might be a true blossom.

If you enjoy discovering by yourself and are willing to take the risk, the Karakum dessert is offering beautiful oasis, some famous like the Merv, a World Heritage site and an ancient famous city on the Silk Road. There are natural state reserves, like Amudarya, Kopet-Dag, Repetek or Khazar.

The mountain or dessert landscapes are certainly rewarding. Also visit Parthian Fortresses of Nisa, an archaeological site and Kunya-Urgench, an eleventh century town, both on the World Heritage List.

Unfortunately the people were subject to many abuses and breaching of human rights. The press was censored as much as possible, even by trying to ban satellite dishes. The situation is improving due to the new president Gurbanguly Berdimuhamedow, but there is much to mend and the authorities, including some government representatives will not change easily. A good point is that, unlike in other former communist countries, ethnic conflicts do not exist or are very isolated, despite the fact that there are orthodox Christian Russians and Islamic Turkmen living together.

The languages spoken are Turkmen, Russian and Uzbek. The literacy level is very high. Also surprising for a population close to or beneath the poverty line is the fact that people are quite healthy, with a life expectancy of about 70 years.

The country could not exploit its natural resources to their full extent due to more reasons. Although the oil and gas are abundant, the main pipeline is the one leading to Russian Gazprom; only recently the building of a new distribution infrastructure to China has been considered.

Another problem is the lack of a legal status for the territorial waters of each country at the Caspian Sea, so every new found oil well is a source of disputes. Foreign investors are not interested in Turkmenistan and around half the population is unemployed. Agriculture is the basic occupation. It is a source for own consumption, but cotton and olive crops, silkworms and the Akhal Teke horses are also the objects of trade. The things necessary in a household are the product of local crafts, some being true art objects: the Yomut and Turkmen carpets, pottery.

Those enjoying crispy dough and bread will certainly like prashka (deep-fried dough pockets, with meat) or somsa, gatlama (fried bread, sometimes served with sugar), bogursak (deep-fried dough, with sprinkled sugar).The local bread is chorek, which is cooked stuck on the walls of the oven. Meat is present in many dishes, either associated with the already mentioned specialties, or with noodles in foods like Gay-ysh, Grechka or a sort of tortellini named pilmen. Try manty as well – a type of dumplings with meat and yoghurt. Everything is accompanied by vegetables: onions (fried or raw), dill, carrots or tomatoes and cucumbers if available in the season. Don’t forget the local Boldumsaz vodka. As fruit, almonds, grapes, figs and melons are specific to the country.

A
A
Ashgabat
guides

Ashgabat is the capital and the largest city of Turkmenistan, a former republic of the Soviet Union. Ashgabat is a relatively new city, founded only in the 19th century, but it was founded on the site of an old Turkmen village with the same name, and it is surrounded by plenty of historical sites and other tourist attractions....  Read more »