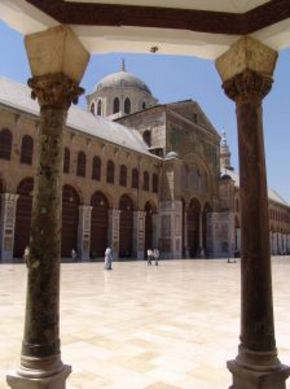 Syria is a country that stretches over 185.180 km2, located in South-Western Asia, bordered by the Mediteranean Sea and Turkey in the North, Iraq in the East, Jordan in the South and West, Israel in the South and The Lebanon in the South-West. Geographically located at the crossroads of three continents, Syria is today one of the most important countries in the Middle East.

The country is divided in two main regions, the Western area consists of a narrow plateau and the coastline mount chain, which protects the core of the country against the humid air masses of the Mediterranean Sea, and the Eastern area consisting of a vast steppe adorned with several oases molded by Euphrates. The highest point of the country is Mount Hermon 2.814m, and the lowest is an unnamed location near Lake Tiberias, -200m. The country is rich in petroleum, chrome, iron and manganese ores, rock salt, marble and gypsum.

The steppe and desert areas are extremely hot, summers are arid and there’s a great difference between temperatures in summer and winter.

The little wild growth found is mainly the brushwood type, such as tamarisk. Terebinth grows in the low hill country of the steppes and wormwood on the plains. The wildlife is typical both to Eastern Mediterranean regions and desert zones. As a consequence fauna is extremly varied: otters, wildcats, hares, antelopes, bears, lizzards, vipers, cameleons etc.

Damascus is the oldest city in the world and it was Islam’s capital during Omayyad’s reign. Here, the religious legends come to life, no matter the visitor’s belief. Syria’s capital, inhabited by over two million people, is projected around the Barada River. Among the sites that give off the perfume of 3000 – year – history there is Omayyads’ Mosque that miraculously survived since 636 AD. The Hanania House, the place where St. Paul had been hiding, John the Baptist’s grave and the underground church are the most visited monuments of Damascus.

Palmyra’s history begins around the year 1900 BC, as an important halting place on the Silk Road, between the Mediterranean Sea and Golf, bordering city between the Roman and the Persian Empires. The Baal Temple and the Arch monument are among the greatest pieces of evidence of Middle East’s classic periods.

Aleppo is the second city as size and importance. Surrounded by red sand and rocky relief, it is a giant citadel, with a population of Armenian origin, a colorful town which develops an impressive silk and cotton industry. Its market places are the most renowned in the entire country.

Visitors need a passport and a visa. Persons bearing Iraeli visas or entry/exit stamps or persons born in the Gaza region are not granted entry. Persons who want to stay more than 15 days in Syria must register with Syrian Immigration by their 15th day in Syria. Although no vaccine is compulsory tourists should take shots against A Hepatites, typhus, tetanus and polyomelites. They should also take oral medication against malaria.

There are three international airports in Syria, located in Damascus, Aleppo and Lattakia. The latter two are most frequently used for charters and domestic flights. One can also get to Syria by train, but that would be quite a long journey. For instance if you leave from London it takes three days to get to Istanbul and then you have to take “the Toros Express” to Aleppo and Damascus. Visitors have three options to travel around the country: by bus, which is the most inexpensive method, by car or there are domestic flights between cities.

If you want to spend your vacation in an oasis of calm and luxury in the heart of the Old City of Damascus, then Beit Al Mamlouka is the perfect Hotel for you. It is a 4 stars hotel, whose staff is friendly and knowledgeable, each room being unique.

Cote d’Azur de Cham Resort is the best place to be put up, if you want to spend fabulous days and nights in Lattakia. It is one of the largest resorts on the Mediterranean Sea, having 600 meters of private sandy beach and 1600 rooms. It has indoor and outdoor restaurant, a lobby bar and a snack bar on the beach. Tourists may enjoy BBQ evenings at the residence.

It is pretty different from the European and the American cuisine, although many dishes have been imported by the Europeans and the Americans, for instance the dőner kebab, shawarma or ba’lawa. The Syrians are well-known for their cheese. Jibbneh mashallale is a very popular string cheese, made of curd cheese, which is pulled and twisted together. They accompany their cheese with cookies, called ka’ak. These are made of farina, rolled out in ring shapes and baked.

Many of their restaurants are old buildings that have been renovated. It is the case of Shami House which had been built in 1865 and renovated in the year 2000. The restaurant presents all kinds of delicious Middle East dishes and it is considered amongst the most famous restaurants in Damascus.

This Halab travel guide will give you an insight into the atmosphere of the northern Syrian city of Halab, which administratively functions as the capital of the Aleppo Governorate. With its nearly 5 million inhabitants, this is the largest governorate in Syria and Halab serves as the centre of the perfect trading route between the Mediterranean and the Euphrates River....  Read more »

Much of the Aleppo history is still visible inside the city in the part called the Old City, which has been a UNESCO World Heritage Site since 1986....  Read more »

Hama or Hamah (meaning citadel), the capital city of Hama governorate, W-central Syria, is indeed a good choice of destination in your coming holidays. Although, there are not plenty of activities and things to do in Hama, you will like spending a couple of days among its serene and picturesque surroundings....  Read more »

It is thus, locally referred to as Al-Fayhaa and sometimes Dimashq and is the capital as well as the largest city in Syria with a current population pegged at 1.6 million approximately. Not only does the city possess a governorate by itself but it is also manages that of Rural Damascus, or Rif Dimashq.  Read more »