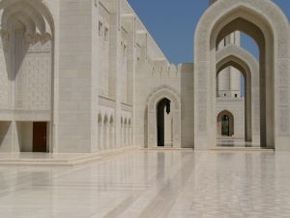 Oman is one of the oft-visited countries in the Middle East and for obvious reasons. Being one of the continuously inhabited lands on earth, Oman is full of archeological remains (some dating back to the Stone Age). Besides these ancient cities and ancient ruins, Oman has many forts, castles and other landmarks worth visiting. Omani history and traditional architecture is certainly captivating, but there is much more for you. On Oman’s stunning sandy beaches like Ras Al-Jinz several turtle species lay their eggs every year and a rendezvous with them cannot be ruled out; since the Omani seas are also frequented by different types of dolphins and whales, you can expect more visual treats. And then there are lures of water sports, desert-safaris and other adventures/activities. To top it all, Oman’s present state of peace and prosperity complete the nation’s appeal as a tourism heaven.

Oman has a stable economy and the Omani-people enjoy a high standard of living. This has largely been achieved because of Oman’s rich natural resources, especially petroleum and natural gas (other resources include copper, gold, gypsum, iron, marble, zinc, etc.). Of late, however, economic reforms have been undertaken to reduce Oman’s reliance on oil through diversification and privatization. The country is now undergoing rapid industrialization and is aiming to develop unconventional sectors like IT, Telecommunications as well as Tourism side by side heavy industries. Oman is also seeking foreign investments in different sectors.

Oman is working on its transport infrastructure. Though the existing roads and highways are in good condition, Oman has no railways. Health and basic education facilities, however, are commendable.

Omani culture is deeply influenced by Islam; but then it is a different type of Islam, Ibadhism, that is followed by the majority. Sunnis, Shias and followers of other religion are present, too. Islamic festivities are part and parcel of Omani culture but religious bigotry is something Oman is devoid of.

Omani culture finds its expression not only in the fields of art, music and dance forms, but also in what the people eat and wear. The Khanjar (a carved dagger) and the Dhow (sailing ships) are important features of Oman’s culture.

Meerut Know the Do’s and Don’ts of the place with the Muscat, Oman - Overview   The city    The capital city of the Sultanate of Oman, Muscat, has been broadly divided into three main regions - the Muttrah, Ruwi and the old town. The Muttrah is the residential arena in Muscat Ruwi is the business hub and the old town encompasses the palace, port area and the harbor....  Read more »

Muscat is one of the oldest cities in the Middle East making it a witness to several important occurrences in history. The proof of such rich heritage is found all over the city. Several buildings, museums, palaces and gardens are strategically placed in the city much to the delight of both local and foreign guests....  Read more »

Nighttime in Muscat is busy despite its predominantly conservative Muslim population. There are good numbers of restaurants and nightspots found in the city for a late night or early night get away. Apart from the famed Omani or Lebanese cuisine available in these restaurants, there are also several choices that may range from Western, European and even East Asian. ...  Read more »