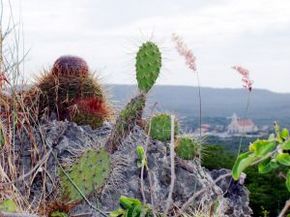 The Netherlands Antilles, situated in the Caribbean Sea, consists of two insular groups: the first includes Curacao and Bonaire and it is located in the North of Venezuela and the second is located east of Puerto Rico. The most important activity of the inhabitants is tourism, the infrastructure being better set than in other Caribbean islands.

The territory of the Netherlands Antilles consists of five islands: Saba, Bonaire, Curacao, Saint Eustatius, Saint Martin. The last island is the Dutch part of the Saint Martin Island. The coastline stretches on 364 Km. The country is almost entirely surrounded by water, its only land boundary being with France, on Saint Martin Island. Its terrain abounds in volcanic hills. Its lowest point is found in the Caribbean Sea and it is 0 m, and the highest point is Mount Scenery (877 m).

Willemstad is the capital of the Netherlands Antiles and the political-administrative center of the Curacao Island. Its population amounts to 125.000 inhabitants, being the biggest city in the Antilles. As many of its buildings are in Dutch style, the city resembles Amsterdam.

Sint Eustatius is one of the smallest islands of the Netherlands Antilles. Together with Saba and Saint Martin it is part of the Bovenwindse Eilanden, a region of the country.

Saba boasts ecotourism. Its popularity is increasing with each year that passes by. Sports like climbing, hiking and diving are the main reason for this. As the waters that surround it were designated to the Saba National marine Park and due to the beauty of its coral reefs, the island has been called “The Unspoiled Queen”.

Famous for its illustrious liqueur, made of sweetened bitter orange peels, Curacao is one of the three Caribbean islands safe from hurricanes. It stretches for over 64 Km, being the plainest island in the country. Its shores are strewn with small bays and inlets where hidden beaches are very appreciated by the tourists who are looking for peace and quiet. There are some important objectives to visit here like Willemstad – the capital -, the strongholds around the port, the Dutch forts, Queen Emma floating bridge, The Floating Market, The Bolivar Museum, the Mikve Israel Synagogue, the liqueur distillery, the Aquarium and the Underwater Park. Tourists may practice water sports like: snorkeling, scuba diving, windsurfing and fishing.

Its economy is based on tourism, and the main activities that make this island famous are scuba diving, snorkeling and windsurfing. As it pays great attention to tourism, Bonaire’s infrastructure is well taken care of.

The tropical climate is specific to the Netherlands Antilles. The weather is warm during the entire year. Unfortunately, hurricanes are no mystery to these outstanding sites, in summer. The only island which is safe from hurricanes is Curacao.

The plant that tourists may often encounter here is the cactus. There are numerous species of cacti among which we count: the Kadushi Cactus, the Vatu cactus –the inhabitants use it to make fences-, Aloe Vera and many others. The famous Divi Divi tree which always points towards West due to the winds which blow from east to west is to be found here, too. There are a great variety of evergreen palms and some poisonous plants like Manzania.

As the islands are studded with tropical rainforests, birds, reptiles and mammals share the territory. Trupial, is a vividly colored bird, most often seen here. The most common mammals are: rabbits, field mice and cave bats. Seagulls, pelicans and cormorants are the seabirds that can be spotted by tourists.

The official currency is the Netherlands Antillean Guilder. The official language is the Dutch, but many inhabitants speak Papiamento – a Spanish-Portuguese-Dutch-English dialect. English and Spanish are also spoken by a large number of people. It is advisable that tourists wear light cotton clothes due to the fact that the weather is pretty warm. All visitors who don’t hold a US passport need a visa for short-stay when they visit the Netherlands Antilles.

Curacao Mariot Beach Resort & Emerald Casino is a remote retreat, lying in front of the ocean, on Piscadera Bay, not far from the city of Willemstad. The resort is endowed with 237 standard guest rooms and 10 suites. All rooms are extremely comfortable and they all include balconies, mini-bars, coffee-makers, tea-services etc. Customers can enjoy here the presence of diving and snorkeling instructors. There is also a shop equipped with everything one needs in order to practice water sports.

Kura Hulanda Resort is a project under the UNESCO auspices and it consists of a hotel, a conference center, a village-like complex, the Museum Kura Hulanda, a spa and a casino. The Museum is what actually makes the hotel unique as it displays the evolution of man, by presenting anthropological facts. The village has everything from boutiques to art galleries. If visitors want to practice water sports they should go to Kura Hulanda Lodge.

Tourists can visit the country by boat or by airplane. Each island has an airport. The five islands have no railroad system, but they have well-preserved roads that stretch on 602 Km. Curacao boasts with one of the most important natural harbors in the world.

Over the centuries peoples like the Dutch, the French the English and the Spanish left important marks over the Netherlands Antilles cuisine. As a consequence, traditional food customs differ from one island to another, but the base is still the Caribbean Creole Cuisine for all of them. Usually all meals are served with Funchi (a pancake of maize flour). An important dish is Pan Bati with Carni Stoba (a kind of stew) and it is served with various spicy sauces. If one has a special event to celebrate, then he should pick for dessert Bolo Pretu, a sort of black cake.

Things about Netherlands Antilles you may be interested in

Willemstad is located on the exotic Curacao Island in the sunny Caribbean. Willemstad travel guide will bring interesting and practical information regarding this capital city.  Read more »

The beautiful island called Bonaire, a peaceful Caribbean island is a perfect destination for nature lovers and for the tourists looking for silent vacations. Bonaire is located near the Latino-American coast, about 50 miles north of Venezuela. The island belongs to the Netherlands Antilles, it is inhabited by around 10000 people and its tiny surface doesn’t exceed 115 square miles....  Read more »