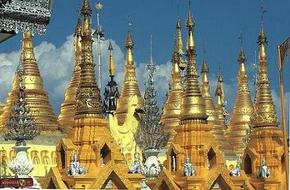 The Union of Myanmar, better known simply as Burma, is a country for the adventurous traveller. However, if ethnic and political tensions don’t scare you, you’ll be in for a treat if you visit Burma. This country’s culture is so fascinating and its lands so captivating that it would be a mistake to visit South Asia and skip Myanmar. The country’s history is marked by waves of invading nations such as Mongols, Siamese and British, and although historically speaking the Burma had to suffer a lot, all the historical drama had the effect of creating a truly unique culture. Even in the 21th century, Myanmar’s politics have been strained and there have been several protests and uprisings, but nothing to worry a daring tourist. Whether you’d like some time off in an exotic five-star hotel or simply observe the sometimes harsh realities of Burmese life, you’ll definitely find what you’re looking for in Myanmar.

Myanmar is the largest country in Southeast Asia, and it is also the happy owner of a 1930 kilometre long coastline along the Bay of Bengal and Andaman Sea. The country has several major mountain ranges that offer excellent opportunities for hiking and trekking, but if you go on a sightseeing tour you will encounter many verdant plains and fertile valleys. While the country’s poor economy may seem like a negative aspect, it allowed for much of Myanmar’s natural environments to be preserved. Lush forests of mangrove, bamboo and acacia cover over half of the country’s territory. Summers in Myanmar are rainy and hot due to the monsoon. Winters are less wet and cloudy, but temperatures are not much lower, thanks to the subtropical climate. If you are averse to high temperatures, you can escape to the coolness of the mountains.

Bordered by countries with a powerful cultural influence, such as India, China and Thailand, it is no surprise that Myanmar is more or less a cultural melting pot that has adopted a few elements from each of its neighbours. However, it shouldn’t be assumed that Burmese culture does not have a distinct identity. On the contrary, the fierce nationalism of Burmese politics in the past is proof of the people’s pride in their culture, language and country. Myanmar is essentially Buddhist, with bits of Hinduism and Animism, but there are sections of the population who practice Christianity or Islam. This mix of religions has given birth to some spectacular temples pagodas and stupas. This Myanmar Travel Guide warmly recommends that you visit the impressive Shwedagon Pagoda and the Mahamuni Buddha, two of the country’s most important pilgrimage sites. If you are lucky, you’ll be in time for one of the twelve yearly festivals in the Burmese calendar. Although the festivals have strong religious significance, you’ll have plenty of opportunity to partake in more worldly pleasures such as traditional dances and singing, fairs and stalls with delicious local dishes.

Former capital and current religious and economic centre of Myanmar, Mandalay is one of the most interesting cities in all of Southeast Asia. Mandalay’s attractiveness lies in its incredible cultural diversity coupled with a strong sense of national identity. The city is emblematic for Myanmar from many points of view....  Read more »

What to do at night after visiting the many historical sites in the area has been one of the most common questions asked by visitors in a foreign place....  Read more »

The city of Yangon or Rangoon offers the first time visitors a number of sights and most of these sights reflect the culture and the history of the city and the country. A visit to the city will not be complete if the visitor failed to check the pagodas that dot the city....  Read more »

Yangon is the biggest and the most populated city in Burma. It is also its former capital since the military government moved it to Naypyidaw. There are also plenty of financial educational and commercial institutions that surround the metropolis.  Read more »