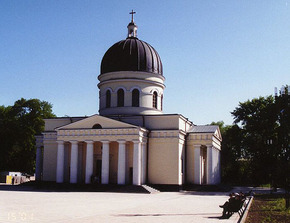 Moldova is situated in the South-East of Europe. Bordered by Romania to the West and Ucraina to the North, East and South, the country stretches over 33.843 Km2. Although the Northern part is hilly, the highest peaks don’t overtop 430 m, the highest point being Bălăneşti Hill. The Codru Plateau covers the North and the center of the country and The Buceag plain covers the South. The main rivers: Nistru, Dunarea and Prut occupy about 472 km2 of the territory.

Chisinau is the largest city, being the capital of the country. It boasts a various cultural tradition that has been accumulated over the centuries.

The National Museum of Archeology and Ethnography

Each hall in the museum is dedicated to a specific historical era: Paleolithic, Neolithic, the Bronze Age and the Iron Age. The establishment was built in 1905 in oriental style, being a unique building of this sort in Moldavia. Among the dozens of pieces exhibited, there is an entire Deinotherium giganteum skeleton, a famous treasure, Bessarabian carpets etc

Located 35 km away from Chisinau, Craftsmen Museum was built in a classic style, characteristic to aristocratic Russian houses of the 19th century. It was built in the middle of a park in 1840. Nowadays exhibition of traditional crafts are held and tourists can see here objects that are specific to Moldavian traditional art. One room displays black and red pottery objects that include everything from toys to plates. Another exhibition shows the procedure used to create stone columns and stone flowers. As Moldavian craftswomen were well-known for their ability of weaving and embroidering of carpets, these are also displayed to show the diversity of Moldavian traditional art.

Gratitude’s Candle is a monument which represents homage to all the unknown heroes who struggled to keep Moldavian culture, language and history among the polychromatic palette of human civilization. The monument is located near Soroca.

One can go to Moldavia by plane, by car or by train. If you want to wander around the country, you may rent a car or you may call for a taxi.

Moldavia has a moderate to continental climate; all four seasons being well distinguished. Winters are mild and summers are warm. Inhabitants enjoy the presence of snow in winter, which melts a bit during the season. The weather is instable during spring, when days are sunnier and the temperature starts rising. Autumns are long and warm. Moldavia is drought-stricken, phenomenon which can be disturbing due to poor water resources.

The only hotel which has a high level of services in Moldavia is the Laguna Hotel. It is located in a resort called Molovata Noua, somewhere outside the capital. People organize business meetings here and it is the place where tourists prefer to be accommodated.

Turks had a special influence on Moldavian cuisine as they ruled over Moldavia for over 3 centuries. Turkish impact is felt in preparing products and in the tendency of using mutton and in the name of dishes: “ghiveci”, “musaca”, “ciorbă”.

Moldavian pastry includes strudels, pound cakes and tarts. Nuts are often used when baking cookies. But the well-known Moldavian hospitality would mean nothing without the trays full of “poale-n brâu”, which is a kind of cheese pies.

All the tourists who are citizens of the countries that are EU and CSI member states need a visa, which will be delivered within 5 days after handing in the following necessary documents: a passport, a recent photo, a round trip ticket or the car’s certificate of registration if going by car. There is no compulsory vaccine. The official language is the Moldavian language. The currency is the “leu”. Its name is of Romanian origin and it means “lion”.

Moldavia is a delightful destination especially if visited during the time of its traditional holidays like: Easter, Mărţişor (it anounces the arrival of spring) and Christmas.

Chisinau is the capital of Moldova and its main economic, cultural and financial centre. Although Moldavians are a small nation, their capital is far from a small town: it is more cosmopolitan then you would think. Cultural diversity, associated with the famous Moldavian hospitality makes Chisinau nightlife a very exciting experience.  Read more »

Chisinau is the biggest city in Moldova and the county’s capital. Located in the center of the country, on the Bîc River, Chisinau has a sense of history like no other surrounding city: throughout the centuries, Chisinau was trampled down by migratory tribes, Turks and Tatars and was taken over by different states....  Read more »

The capital of Republic of Moldova, Chisinau is a city with a long and tormented history. Throughout its almost 6 centuries of existence, Chisinau was under siege, flooded, burnt down and bombarded to an extent that there are almost no traces of medieval Chisinau....  Read more »

Chisinau, or Kishinev is the capital city and also the largest municipality in Moldova. This Travel Guide will give you an insight of Chisinau`s touristic potential. The city was founded in the late 1400s,with the initial purpose of serving as a monastery. It is located in a rich agricultural area, in the country’s center, on the river Bic and benefits of an international airport....  Read more »