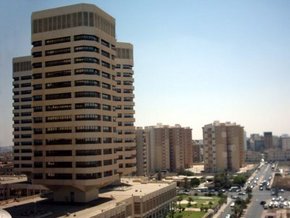 Libya tourism means a lot – treading into the realm of history, enjoying the breathtaking beauty of Nature and engaging in fun/thrill activities. Libya has been the scene of ancient civilizations and the cities shrouded in their veils of mystery wait to be explored not only through their historical monuments but through their art and culture. Libya’s natural world, likewise, will enchant you with its diversity. With the Sahara covering almost 90% of the land area, you cannot expect unfolding of a new vista at almost every step, but you will see more than just sand dunes and vast seas of sand, with interruption coming across in the form of palm-fringed picturesque oases and multi-colored lakes. Moreover, with Libya’s sea-side resorts and active handicrafts markets, Libya travel really means a lot.

Tripoli: Tripoli, the capital city of Libya, is the tourist hub of the nation. Founded in first millennium B.C., the city has a wealth of historic monuments like the Marcus Aurelius Arch and the Al-Saraya Al-Hamra Castle. The city also has some attractive mosques like the Karamanli Mosque and the Gurgi Mosque. A visit to the city’s museum is a must for a quick recap of the city’s ancient past. Adventure-seekers can look forward to Tripoli’s Mediterranean beaches. A green city with lush gardens, Tripoli is the ideal place for picking up Libyan handicrafts such as handmade carpets, jewelry and wares, leather goods, etc. Tripoli also gives easy access to nearby historical sites like Leptis Magna and Sabratah (both are UNESCO World Heritage Sites).

Benghazi: Benghazi, Libya’s second largest city after Tripoli is a tourist destination of no main importance. Laze around in Benghazi’s famous beaches or engage in aquatic sports; visit the Greek/Roman ruins to collect facts about Benghazi’s ancient heritage or take rounds of Benghazi’s roofed souqs to check-out stuff on sale. Benghazi is also ideal for exploring nearby attractions like the ancient Greek town of Cyrene (a UNESCO World Heritage Site) or the battlefield of Tobruk. The Green Mountains are also within easy reach.

Ghadames: The UNESCO World Heritage Site of Ghadames is one of Libya’s chief tourism destinations. Settled for the first time around 5000 years ago, the now abandoned Saharan-township is a great attraction with its white-washed mud-built houses. The houses are rather unique in their structures/designs, something that helped avoid the extremities of desert-temperatures. Ghadames festival is organized every year in the month of September for three consecutive days. Move deeper into the desert from the oases town if you are willing for more and you will reach the Jebel Acacus or Tadrart, famous for its pre-historic rock paintings and carvings.

Libya’s huge petroleum reserves (in fact, the maximum in Africa) make it an oil-based economy. Libya’s petroleum sector brings home almost all the export earnings (Libya’s export commodities include crude oil, refined petroleum products and natural gas). Attempts are on to diversify Libya’s economy, but still the oil-sector’s contributes nearly half of the GDP. Other important Libyan industries include cement, food-processing, steel, iron and textiles. Libya has a strong services-sector, especially oil-services sector but tourism is getting bigger. Agriculture, though practiced on large scale, has not made the nation self-sufficient in food-stuff.

Libya’s high per capita income and its low population may not have succeeded in ensuring high standards of living (when compared to that of the developed nations), but its oil-sector has gifted Libya with advanced-infrastructure – be it in the fields of communication, transportation or electricity-generation.

Libyan culture is a nice blend of Arabic culture, indigenous traditions and Italian influence. Of course, the most pronounced influence has been that of the Arabic culture because a large section of the populace traces its origins to a nomadic Bedouin tribe of Arab. They mostly use the Arabic language and hence Libyan literature is rather Arabized.

The Berbers, Tauregs and other North African tribes use their languages; but they are mostly restricted in specific pockets. The music of Libya has been influenced by the culture of the indigenous tribes. The Italian colonization also had its influence on the Libyan culture and is most apparent in the Libyan cuisine.

Tripoli, the capital of the North African country of Libya, is a charming, if sometimes overlooked Mediterranean port that is perfect for a quiet, relaxing holiday. Tripoli seem like a world apart from Tunis and other North-African destinations, as it lacks the bustle and the Arabian Nights atmosphere that permeates them....  Read more »

The city of Ghadames isn’t as famous as many other cities of Libya, yet you will find many tourists visiting this city due to two major reasons. Firstly, to enjoy the sight of the desert that surrounds it and secondly to use the city as their halting station on their way to the southern cities of Libya, namely Niger and Sebha,....  Read more »

The city of Ghadames is part of Libya and is famous due to its calm atmosphere. The streets of this city are white, which gives them the refreshing look that you might not get in many other cities in the world. Ghadames is actually an oasis town, located in the western region of Libya. It is situated around 550 kilometers away from the south-western region of Tripoli....  Read more »