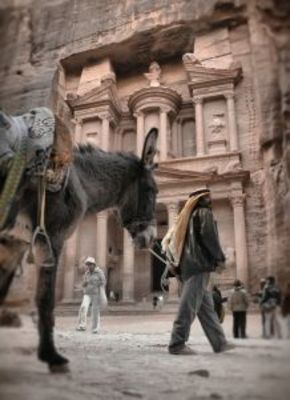 Petra being voted as one of the ‘New Seven Wonders of the World’ has indeed been a boon for Jordan tourism, but the tiny desert kingdom has always been a favorite travelers’ haunt. The once-lost Nabataean city is only an instance of Jordan’s antiquity and you will come across many such archeological ruins, equally spell-bounding in their beauty in Jerash, Umm Qais and even in the urban-center of Amman. Again, there are many medieval castles strewn all over in Jordan. Look beyond the ancient cities and citadels and you will not only have some spectacular natural scenery unfolding before your eyes in the red-sand deserts of Wadi Rum or the coral-filled Gulf of Aqaba but also stumble upon Biblical sites such as the Jordan River (where Jesus was baptized by John the Baptist) and Mt. Nebo (where Moses had his last view of the Promised Land). You will not be done yet, for Jordan promises you much more – water-sports, hiking, wildlife viewing, fine-dining, great shopping – all these with assurances of safety and unparalleled hospitality.

Jordan is one of Middle East’s most liberal economies and the ‘business capital of the Levant’. With inadequate natural resources (except, oil shale, uranium, natural gas and phosphates) and a very weak agricultural sector (due to scarcity of water and low rainfall), Jordan relied on foreign-aid to a large extent in the past. The adoption of liberal economic policies in 1999, however, ushered Jordan into a new era of economic growth. Today, Jordan has emerged as a trade-center and many business-houses of its neighboring countries operate from Jordan (mostly from their offices in Amman). If this has increased employment opportunities, Jordan’s developed services-sector (that contributes more than 70% of the GDP) has helped reduce unemployment.

Jordan is infrastructure-wise and quite well-developed. Although the dearth of conventional energy resources like petroleum poses a challenge for the energy sector, Jordan’s telecommunications and transportation systems are quite strong and have well supported Jordan’s image as a trade and tourism center.

Jordan’s culture, like the other Middle Eastern cultures, manifests influences of the Islamic Arab world. Jordan’s state religion is Islam, with the majority of the populace belonging to the Sunni sect. They speak Arabic but English is widely understood and used, too. Jordan has rich culinary tradition, but the Jordanians are also famous for their hospitality and this is something to be savored along with Jordan’s tasty fare. Jordanian traditional music has very pronounced Bedouin influence. Belly-dancing is the other form of performing art practiced by Jordanians. Speaking of Jordan’s visual art, you find it depicted in various forms – as landmarks, frescoes, mosaics, calligraphy or as crafts including beadwork, jewelry, carpet-weaving, etc.

A
A
Amman
guides

Gone are the days when Beirut and Tel Aviv were the nightlife hubs of the Middle East. Although the capital city of Lebanon and the second largest Israeli-city continue to attract partying-crowds, other Middle East destinations like Amman, Damascus, Dubai, Istanbul and such other cities have become quite popular with night-owls....  Read more »

The city of Amman, like other Levantine cities of Beirut, Byblos, Damascus, Jericho, Jerusalem, Sidon, etc., is one of the oldest ‘continuously inhabited’ cities of the world. Different civilizations – Byzatine, Islamic, Roman and others have risen and declined during this almost continuous inhabitation, enriching the city architecturally, culturally and otherwise....  Read more »

The city of Amman, Jordan, is essentially an ancient city. Like other nearby ancient cities of Aleppo, Beirut, Byblos, Damascus, Sidon, Tyre, etc., Amman has seen several civilizations. Archeological excavations have established that the earliest of these was a Stone Age settlement in eastern Amman; this civilization is believed to have had very well-developed art and culture. ...  Read more »

Amman, also spelled as Amman, is the capital of Hashemite Kingdom, Jordan and its population is around 2,125,400 as per a 2005 estimate. The city serves as a major commercial center and administrative capital for Jordan, it is the biggest city of Jordan and capital city of the Amman Governorate. ...  Read more »