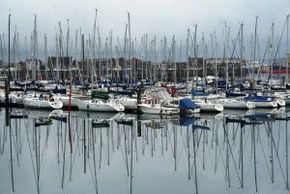 Rainy Eire occupies the southern portion of the Irish Isle, stretching over lush green hills and pastures. Although culturally similar to its neighbor, Northern Ireland, Ireland is an independent republic. The country has been under the British rule for centuries, and thus it has borrowed many aspects of the British culture and way of life. The official languages of Ireland are English, inherited from their Britt cousins, and Irish Gaelic, the original language of the island’s inhabitants. Although the Gaelic language is spoken by fewer and fewer people in Ireland, the country has a rich folklore, literature and art, which have not been tainted or erased by the foreign occupation. This Ireland Travel Guide will give you a taste of this wonderful country.

The Celts, the ancestors of the modern Irish, arrived to the island in waves beginning with the 8th century BC. Many gold and bronze artifacts survived from this period and can be seen on display in museums in Dublin, the country’s capital. The last wave of Celts, the Gaels, colonized Ireland and divided it into five kingdoms ruled by High Kings. Christianity was brought to Hibernia, as the Romans called Ireland, in 432 by St. Patrick, the patron saint of the country. Many of the cities in present-day Ireland were founded by the Vikings who came to the island in the 9th century. The following centuries witnessed clashes with the neighboring English, who tried to impose their authority and their religion on the native population. The Republic of Ireland came into being in 1922, after a bloody war of independence. After its adhesion to the European Union, Ireland entered a period of great economic growth, known as the ‘Celtic Tiger’, and today it is one of the most well developed countries in Europe.

Despite its small size, Ireland boasts of an incredibly rich culture. Irish poetry is the oldest in Europe, and Ireland has yielded numerous writers that achieved international fame, such as Swift, Bernard Shaw, Becket and Joyce. Folklore plays an important part in Irish culture, and even nowadays, the legends and myths of the olden days are passed on with pride. Irish music and folkdance are known worldwide, thanks to shows such as the Riverdance. The 20th century was a flourishing period for traditional music and dance, thanks to a revived interest in Irish culture. Dance and music, as well as folklore, are taught at Irish universities and are a great source of pride for the country.

The natural beauty of Ireland is what draws most tourists to the island, but there are several historical sites that are equally fascinating. Bunratty Castle, Blarney Castle and the Rock of Cashel are exquisite examples of medieval fortresses that have been converted into museums. The Cliffs of Moher rising above the Atlantic Ocean are a sight that should not be missed at any cost. For a journey into Ireland’s past, visit the Aran Islands, three tiny time capsules that preserve forts and villages from the Iron Age. These are only a few of the many wonderful places that you can visit in Ireland. This is a country where you can find something worth seeing at every corner!

Shannon is a small and picturesque town in County Clare, Ireland, not very different from all the other Irish towns at first sight. However, what’s special about Shannon is that it is one of the three planned towns on the island. While it might not have the rich history of Galway or Cork, Shannon is not entirely without some charm of its own. ...  Read more »

Galway, in western Ireland, is one of the most scenic and most colorful cities in the country. Known since ancient times as the city of the tribes, now more than ever this name is appropriate for Galway. The city is a cultural melting pot, with a large number of immigrants, tourists and international students....  Read more »

Although at the first sight Drogheda seems like a sleepy little Irish town with nothing remarkable about it. However, Drogheda is in fact the second largest town in Ireland, and a major port and industrial town. Drogheda is permeated with the almost magical atmosphere that fills rural Ireland due to the Neolithic burial ground which is considered its greatest landmark....  Read more »

Cork is the second largest city in the Republic of Ireland after Dublin, and the third of the most populated ones on the island. The city is crossed by the River Lee, which account for Cork’s original Gaelic name, corcach, meaning a marshy place....  Read more »

The County Kerry in South-western Ireland has always been one the of the country’s most popular tourist destinations. The natural beauty of the region makes it one of Ireland’s most representative landmarks, and billions of tourists from worldwide visit it every year....  Read more »