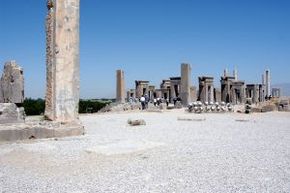 Home to one of the oldest continuous civilizations of the world, Iran is full of archeological architectural ruins and attractions dating back to antiquity. A land steeped in culture, Iran promises you sightings of fifteen UNESCO World Heritage Sites besides its rich cultural heritage. Of course, Iran has more to offer in the form of its varied topography.

Iran is part highlands (known as the Persian Plateau), part coastal plains, part rain forests, part desert land. It also has some spectacular beaches along with water-bodies like rivers, lakes, lagoons and even waterfalls, beside the Persian Gulf or the Caspian Sea. These different physical features not only attract tourists by their sheer panoramic beauty, they even promise a wide range of activities. Famous for its carpet-weaving, metal-working and culinary traditions, Iran travel promises you a gala-time.

Tehran: Tehran, the capital city of Iran, is the tourism hub of the nation in spite of being a bit cluttered and chaotic. The city has the maximum numbers of excellent restaurants and hotels in addition to its sights and attractions. Tehran’s attractions include grand palaces, mansions, mosques, halls and towers like Golestan Palace, Green Palace, Madraseh va Masjed-e Sepahsalar and Milad Tower. Tehran has many museums and art-galleries. The city also has some skiing and vacation resorts nearby.

Persepolis: Built during the Achaemenid Empire days, the grand Persepolis city is in ruins but it still gives a glimpse of the once great civilization famous for its art, architecture and culture.

Tabriz: Tabriz is yet another city that attracts you with its architectural and cultural treasures. The city is full of brick-built edifices like the Arg-e Tabriz, the covered Bazaar, Jameh Mosque, etc. some of which are over a millennium old. Monuments like the Blue Mosque are a must-see for their calligraphic art and blue mosaic tiles. The city has important museums like the Azarbayjan Museum and the Qazar Museum. The Poet’s Mausoleum should be in your itinerary.

Iran has a mixed economy with state-control over its natural resources and chief industries. Private players are allowed to engage in small-scale trading. Iran’s industrial and service sectors contribute almost equally to Iran’s GDP; however, the contribution of agriculture has always been low because only 20% of land in Iran is arable. Iran has still not attained self-sufficiency in food-production.

An oil-driven economy, Iran has long thrived on crude-oil exports and it still continues to bring in maximum foreign currency. Other export-commodities include petrochemicals, cars, carpets/handicrafts, fruits and nuts. Iran’s chief imports are food-stuff and industrial raw materials.

The Iran-Iraq War had wrought havoc and the country’s infrastructure was left panting; however, the hard-work of the Iranian governments over the last two centuries has successfully restructured the country to a great extent. Today, the nation has infrastructures – be it communication, education, health-facilities, transportation or energy. A little more effort on the part of the government will see Iran top rankings as a tourism-haven.

Iran’s culture (rather Persian culture) is the by-product of its long-standing civilization and it incorporates both pre-Islamic as well as Islamic influences. Thus, Persian, one of the oldest languages of the world, continues to be the official language of Iran. The people of the Shia Islamic nation also observe many pre-Islamic rituals and take part in ancient festivities like Nowruz.

Again, Iran continues with its old carpet-weaving tradition. The Persian culture has been so rich since its earliest days that it has not only influenced the art, architecture, craft, cuisine, literature, etc. of Iran and the Iranians, but it has also left deep marks on people and their cultures in faraway lands.

The beautiful city of Qom which is famous for its intense religious life, is located in northern Iran, only a few kilometers away from the Caspian Sea. Qom travel guide will help you make a better image about the city’s natural background, economy and cuisine.  Read more »

Shiraz is neither the largest nor the most populous city in Iran, but it is certainly one of the most charming. Shiraz is one of those Middle Eastern cities that bring to mind stories from the Arabian Nights, a city that captures the imagination of anyone who happens to set foot on its cobbled streets....  Read more »

This Esfahan travel guide will give you all the necessary information you need when travelling to the third largest city in Iran, which is also known as Isfahan. It is the capital of Esfahan Province and has a population of 1.600.000, with a metropolitan area reaching up to 3.500.000 inhabitants, which makes it the second largest urban agglomeration in Iran after the capital Tehran....  Read more »