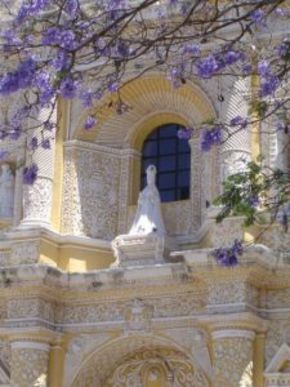 A mystical land which is worth being visited at least once in a lifetime, Guatemala captivates any of its visitors with an incomparable collection of landscapes, striking features, and indigenous culture. The land of ancient Maya, Guatemala is one of the most wonderful countries in Central America. Famed for its fabulous Maya temples, native culture and its tumultuous Maya festivals, Guatemala also offers the best destination for those looking for sunny Pacific coastline beaches and watersport activities as well. A visit to Guatemala means new challenges while discovering the incontestable beauties of Antigua, the city among three volcanoes, or exploring the Maya village Nebaj, which is perfectly hidden into the Cuchumatanes mountains, or wandering through the crowded markets at Chichicastenango – to name but a few.

Guatemala’s relief is mainly dominated by mountains and highlands. The two mountain chains, The Cuchumatanes Mountains in the north-west, and the volcanic Sierra Madre Mountains in the south-east, delimit the Central Highlands, which consists of rolling hills, plateaus and deep valleys offering beautiful sceneries. The Sierra Madre Mountains are characterized by volcanic peaks, 4 of them still active, Pacaya, Santiaguito, Fuego, and Tacana. The highest top in the Central America, Tajumulco Volcano, 4,220 m, is located in this mountain chain.

The tropical jungle in the northern lowlands, named Petén, covers one third of Guatemala. Lake Izabal is situated here, and it is the largest lake in the country.

The Pacific lowlands are characterized by grassy farmland and volcanic sand beaches.

The climate in Guatemala is quite pleasant all over the year which makes travelling possible at any time. It varies according to altitude. The northern lowlands are hot with an annual average temperature of 20 degrees Celsius, rising sometimes to 37 and abundant rainsfall during the rainy season, from May to November. In highlands the temperature is lower and drops sharply at nights. The coastal regions have a hot and humid tropical climate. The dry season lasts from November to April and it is characterized by less rainfalls and lower temperatures.

Because of its location on the Caribbean Sea and the Pacific Ocean, Guatemala is often a good target for hurricanes.

Located in the Valle de la Ermita in the south central part of the country, Guatemala City, locally known as Guate, is the capital city of the Republic of Guatemala and the largest city in Central America.

Guatemala City is the most cosmopolitan city in Central America and the starting point for visiting the rest of the country.

paintings, engravings, sculptures, as most of the museums are located in Guate. Those interested in Guatemalan handicrafts can find some unique pieces of that kind in the Central Market. If planning a journey around the country, the Relief Map in Minerva Park shows the extension of Guatemala. Torre el Reformador is the only scale replica of the Eiffel Tower in the world and it can be seen here.

For recreation, pedestrian roads offer the best entertainment, commerce and various cultural activities at daytime, and Zona Viva represents the main centre for lively nightlife. The city also offers numerous services and commodities to its visitors.

Antigua Guatemala is an important city in the central highlands especially for the large number of its spectacular ruins of colonial churches as well as for its Baroque architecture. It is also considered to be the monumental city of the Americas. But the most spectacular is the fact that its horizon is dominated by three large volcanoes: the Volcano of Water, 3,766 m, to the south, Acatenango, 3,976 m and the Volcano of Fire, 3,763 m, to the west of the city. The latter is famous for being constantly active at a low level. However, smoke issues from its top offer the spectacle of the day.

Guatemalan type of food varies according to its specific region, but many traditional foods are based in Maya cuisine and mainly consist of corn, chilies, tortillas and beans as the important ingredients. There are also dishes which are served on certain days of the week, paches on Thursdays or tamale on Saturdays, and on some specific holidays of the year, fiambre for All Saints Day (that is November 1st) or varieties of tamales on Christmas Days. Caldos, which are some kind of meat stews and sopas, which are nothing else but soups, are very popular dishes as well.

The currency of Guatemala is the quetzal, divided into 100 lenes. Its name is borrowed from the national bird of Guatemala, the Resplendent Quetzal and it has a strong historical value because it is known that the ancient Mayan people used the quetzal bird’s tail feathers as their currency at that times.

To conclude, Guatemala is a magical place in Central America, which can captivate any visitor with its irresistible attractions. Just go for it!

The nightlife is very diversified and lively.  5 p.m. is the time when clubs and bars start to welcome their guests. However, these clubs will often continue partying into the early morning hours, sometimes as late as 6 a.m.  There are many unique restaurants, bar, and clubs for the locals and the tourists to enjoy.  Here are a few. ...  Read more »

Guatemala is a fascinating country between its ancient Mayan civilization, Spanish colonization, Political Turmoil and local culture, it has more than enough to interest the travelers that come to this great city.  This city is decorated with beautiful colonial architecture.  Guatemala City has numerous churches all around its downtown center, which make the area absolutely exquisite....  Read more »

Guatemala has an important history that has helped to shape Central America.  Throughout the entire city, you can view the great history of the Spanish Colonization of the area.  Beforehand however, Guatemala City was an important area for the Mayan civilization.  The Mayan’s capitol city was Kaminaljuyu, which is located just outside of Guatemala City and today you can visit the ruins. ...  Read more »